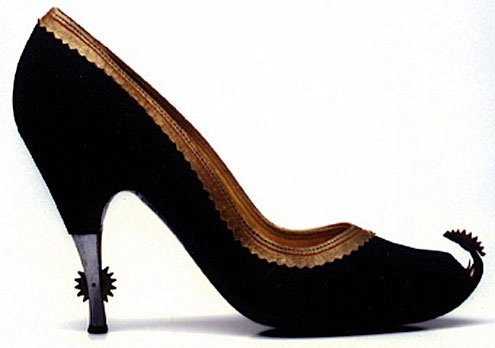 Da Co' designs, including the Paparazzo, are famous.
G

rowing up in Rome, Silvia Dal Co’ recalls playing dress-up in her grandfather’s shoe store. She’d prance around in high-heels in the discount section of the Via Veneto boutique that designed and sold custom-made footwear. The activities of the glamorous upstairs grown-ups interested her little. Never mind that they included the likes of Audrey Hepburn and Ava Gardner, among the leading female movie idols in an age that delighted in them.

In the mid-1960s, Rome was under the influence of La Dolce Vita, a party lifestyle that took its name from Federico Fellini’s bittersweet movie opus of 1960 in which the suddenly booming capital was depicted as a haven for playboys and women on the prowl.

The city was packed with international visitors determined to look good for a good time. Celebrity female visitors usually trekked to the illustrious Fontana Sisters to order their gowns and dresses. For matching shoes they headed to Alberto Dal Co’, who was a cousin of the popular sisters.

Silvia Dal Co’, the little girl who once played in Via Veneto basement, is now 46 and charged with keeping the family shoe legacy alive. She does so, at least in part, by honoring her grandfather’s preferences. “He was a man with a lot of imagination and creativity that gave him a real vision to design shoes that women love,” she says.

Born in 1902 in tiny Traversetolo in the province of Parma, Alberto — who died in 1963 — learned to make shoes as a boy. After World War II, with Italy depressed and cash hard to come by, his sister Amabile convinced him to move to Rome. He opened his first boutique on Via Francesco Crispi, the narrow street that descends from Porta Pinciana steeply into the city center.

But Via Veneto was the place to be, and Alberto knew it. He moved his store there in 1951, well ahead of the Dolce Vita craze, to be near the cafes, shops and hotels that attracted a stream of wealthy visitors. Americans in particular could take advantage of the U.S. dollar, which in the years after World War II all but controlled the European economy. His work with the Fontana Sisters led to the creation of the Fontalco’ line, which specialized in shoes and matching handbags.

The mass consumer shopping of today was less important than knowing your taste in clothes and shoes. Window displays were also less prevalent. “Women could bring in a design or a picture of a shoe they liked and my grandfather would have it ready for them in a week,” says Silvia. And sometimes a shoe Alberto designed was a hit on its own. In 1953, he made the “Paparazzo” — named appropriately after the celebrity photographers who camped out in front of hotels and outside nightclubs.

The dressy shoe featured a spiral wheel on both the heel and the front of the shoe. The “Paparazzo” was so popular and striking it was entered in shoe design exhibit at New York’s Metropolitan Museum of Art.

When Dal Co died the store shifted to his daughter, Nives, and then to Silvia, who moved the store yet again to its current location on Via Vittoria. Silvia designs two annual collections —Spring/Summer and Fall/Winter. She also maintains an archive of about 1,000 designs produced over the decades.

“As fashion changes its course and things come back into style, often times we refer back to my grandfather’s designs from the 1950s,” says Silvia. A model of the “Paparazzo” is still on display and some Dal Co’ clients over the years have asked Silvia to reproduce it.

Dal Co’ customers are still their own best designers at times. “Some of our clients with a real fashion sense of what a great pair of shoes can look like will often try on one of our designs and then ask for it in a different color, pattern or with a shorter heel,” says Silvia. Customers with an eye for couture and a gift for designing can bring in their designs for Dal Co’ to match in shoes.

The store keeps no shoes in stock. If you like a shoe on display, you try a floor sample (many sizes are available), have your feet measured, and return a week later to pick up the finished product. “Most of our clients trust our judgment because of our history in the fashion world. But if someone were to bring in a design or a picture of a shoe they liked, we’d be happy to make it for them,” says Silvia.

The Dal Co’ clientele has changed over the years. In the 1950s and 1960s the celebrity crowd was dominant. Today, however, celebrities — now mostly Italian — make a different set of demands. They are less interested in workmanship and more eager to receive their shoes free of charge. “Times have changed. [They] say if we give them shoes for free, they’ll give us publicity,” says Silvia. “But we don’t really need the publicity.”

Nor are the shoes cheap. Dal Co’ designer models start at €400. “We have about 200 loyal customers who come back to us continuously because they believe in our work.”

Silvia makes no excuses for continuing to cultivate an elite crowd. The wife of the late Gianni Agnelli, Marella, is a client, so is the Spanish royal family, she says. “Last year, we designed shoes for the guests attending the wedding of Prince Felipe of Spain,” she says.

Women with a serious shoe fetish, Silvia concedes, own more than a few pairs. “Some of our more serious clients have so many shoes that they keep them in boxes with Polaroid pictures of the shoes taped to the outside of each box so they can keep track of which shoe is where.”

Silvia understands. “I would say I have about 150 pairs at home, that I had to buy a special rack that neatly stores them in a way that I can see each shoe and not forget the ones I have,” she concludes.