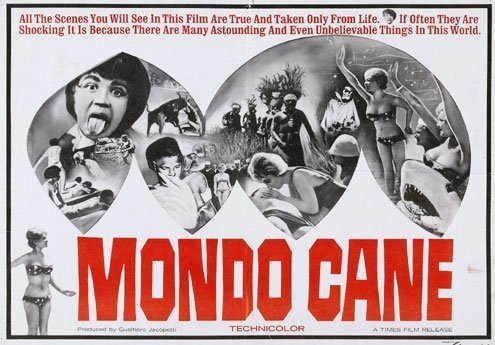 All the scenes you will see in this film are true and are taken only from life...
O

nce, while I was still an undergraduate student in cultural anthropology — the discipline of human culture — I dared against my better judgment to watch the reviled Italian exploitation documentary, “Mondo Cane.”

“You’ll love it,” my father implored. He’d screened it in the 1960s while a projectionist in Chapel Hill, where University of North Carolina students flooded the Varsity Theater in anticipation of bare-breasted African women and brutal animal slaughter. Like a live action National Geographic. Only crueler, and more racist.

Most students of anthropology today would tear “Mondo Cane” apart like a chicken carcass, bone by bone. But for Dad, born well before parlance like “globalization,” the 1962 film evoked the exotic. The peculiar. The “other” to our Western “us.”

“Mondo Cane” (“A Dog’s World”) barks like an idiot canine at the thresholds of humanity. It mocks indigenous children playing in the streets with an animal intestine blown up as a ball. It celebrates white women as cucumber-cool sex symbols while positing indigenous women as sex-crazed barbarians. All of this, of course, made more sense in the 1960s than it ever could now. The film was produced at a time when there was still a world that Westerners hadn’t seen. A world the Internet has since made obsolete. The trouble with “Mondo Cane,” though, is that rather than explain the world’s naturally occurring strangeness, it exploits it by stripping it of its dignifying context. It brutalizes culture. It plunders it with shame.

The shot that disturbed me most wasn’t even bloody, nor was it sexual. A Chimbu woman in Papua New Guinea is shown suckling an orphaned pig after the tragic loss of her own infant child. The disgusted narrator explains the scene with baffling sophistry: “There is still one place on this earth where there is not that much difference between the life of a child and that of a pig.”

Such unapologetic ethnocentrism — the belief that one’s culture is a benchmark by which all others should be judged — made me roll my eyes. While “Mondo Cane” portrays indigenous peoples as violent because they decapitate livestock with machetes, it neglects to mention that American and European slaughterhouses are just as savage. This sloppy, neglectful presentation is replicated in every shot.

But I will say this: the filmmakers treat everyone on screen, not just a few, like wild animals. And the wild animals of the film, in turn, are personified with amusing (if asinine) human narratives. “Mondo Cane” does not discriminate in its approach to who and what is perverse. No one is barred from mockery. Even fellow Italians. Director Gualtiero Jacopetti (directors Franco Prosperi and Paolo Cavari aided and abetted) shot footage in more than twenty locations, among them Macau, the Marshall Islands, Rome and Pasadena. Shots were often staged. The rest is the result of editing. Grandiose, “Gone With The Wind” editing. Sensational music and romantic Hollywood cutaways:

“All the scenes you will see in this film are true and are taken only from life. If often they are shocking, it is because there are many shocking things in this world. Besides, the duty of the chronicler is not to sweeten the truth but to report it objectively.”

It’s so insulting that the filmmakers believed this melodramatic house of cards could pass for truth that the joke really seems to be on them.

Or maybe not. Our modern acceptance of images as reality is what Guy Debord called the, “Society of the Spectacle.” The spectacle is not in the images, he wrote, but in how images mediate social relationships among people. “Mondo Cane” likewise asks us to mediate our understanding of one another with disturbing images that produce the illusion of difference. There’s not much difference between us and the “savages” depicted in the film. Cultural practices may vary, but we’re all idiosyncratic. Beer guzzling Berliners are no odder than amputee fishmongers on the beaches of Taipei. Yet if we witness a superficial difference on screen, we’re more likely to believe it’s true. Film has that inexplicable power to make representational life look so bold, so ugly, so deviant. And deviancy is easier to believe than beauty. Since, for most of us, beauty is too good to be true.

What scant loveliness the film possesses gets spoiled. French artist Yves Klein’s alluring anthropometries, created by nude women (“living brushes”) splattered in signature International Klein Blue paint, are cheapened and sexualized. Klein suffered a heart attack when he saw the film at Cannes in May 1962 (it was nominated for the Palme d’Or, the festival’s best film award). The misrepresentation of his art was too much to bear. For Jacopetti, the scene was just an excuse to show breasts. Art was of no consequence. This is an exploitation film, after all. And while the heart attack, 35-year-old Klein’s first, didn’t kill him, he suffered two more that year, the final one ending his life.

I asked Dad what scene from “Mondo Cane” stuck with him the most. “People running through the streets covered in blood,” he said after a few moments, admitting he couldn’t recall much else. He was describing a forgotten minority of self-mutilating Catholics in a small Italian town. On Good Friday, they’d rub broken glass against their legs and parade through town, stopping every so often to freshen the wounds with glass shards.

The filmmakers provide almost no explanation for the bloody tradition. Like everyone else in the film, this Catholic minority has no agency. They’re never interviewed. They’re never asked to speak.

It’s the mark of a good anthropologist to question one’s own people and practices, but I don’t think Jacopetti and his team deserve that much credit. The film is far too unintelligent to raise its own questions. That’s for us, the audience, to do. To challenge the spectacle. Not worship it.