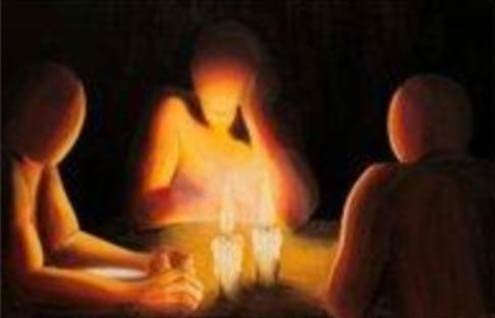 No guarantees, and then the aftermath.
&

#8220;Hey, don’t forget we have that dinner tonight,” Alberto says as he goes out the door for work. “How could I forget,” I say, and roll my eyes. Three recently divorced straight Catholic guys getting together with the gay atheist couple for dinner on Good Friday.

I can’t help being angry with them. They are the privileged ones. They take for granted all the legal rights, religious consent, family support, and social affirmation that the gay world has been denied. And still they fucked up.

Cristian, Marco, and Davide may not have been princes, but about 25 years ago they may have qualified as white knights. They were handsome, well-educated, with promising careers in the medical profession. They found women who were beautiful and smart with careers in teaching and social work. There wasn’t a frog in the group. Each couple was a good fit. They married and started families.

Alberto had always been the odd man out. He was the perpetually single guy, “waiting for the right girl to come along.” I arrived instead — big, hairy, always an outsider. But at that point no one could pretend any longer.

Of course, Alberto and I followed a very different direction than the others, but we still stayed in touch with them. We always got together around Christmas and Easter for a group dinner. As most gay people do, we watched from the sidelines while their families grew, and grew up. Marco, drawing on inexhaustible energy, was the master at balancing family, social life and work. Davide was spontaneous, fun and had a passion for Bruce Springsteen. Cristian was a model Italian suburban family man with a semi-detached house, a love for backyard BBQ’s, and involvement in all kinds of community activities such as church, choir and football. From what we could see, their worlds were rich, complete and satisfying. Each one was living his own version of the fairytale.

Then, a few years ago, it was as if their fairy godmothers went sabbatical. The fantasies began to unravel. During the family vacation to California, Marco decided to confess that he was having an affair that he didn’t want to end.

Shortly after that, we learned that though Davide and his wife shared the same bed, they had not had sex for more than a decade. Even Bruce Springsteen wasn’t enough of a shared passion enough to sustain them.

The reasons why Cristian and his wife split up are less clear. I suspect Cristian’s inflexibility was at the heart of it.

This year’s dinner is at Cristian’s new apartment. It’s neatly furnished with used 1970s essentials giving it a slightly nostalgic feel with no swinger appeal. The table is already set. Cristian serves salami but doesn’t touch any himself. Then he brings out a perfectly prepared baked fish. It is Friday, after all. We — five middle-aged men — sit around the table, eat and talk mostly about work. Marco re-tells a joke his 16-year-old son told him. It’s not even remotely funny. I suspect his son was just filling in silence when he told it to his father. Davide, a psychiatrist, infamous for instigating provocative, racy conversations, says little.

All three men appear to be searching for answers but in a typical heterosexual male way, they are unable to express their feelings and unwilling to discuss them. Out of the old gang, Alberto and I are the only intact couple remaining. It’s an observation that has been pointed out so often that I suspect they see this as some kind of competition between team homo and team hetero.

In the search for happily ever after, it doesn’t matter whether we are gay or straight, sometimes shit happens.