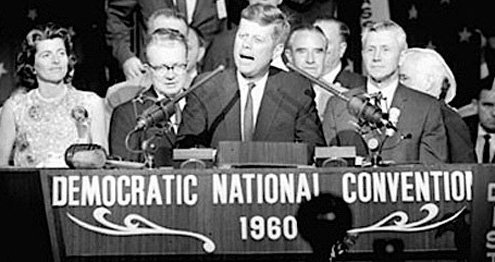 he sport of baseball has a useful construct to determine a victor. The home team bats last, giving it a last chance to win the game. This detail helps frame a week in which the gracious John Kerry accepted the Democratic nomination for the presidency.

A convention by nature suspends disbelief. It is a conflagration of carnival barking in which vertiginous platitudes are uttered to apoplectic followers between MTV music breaks and familial kitsch. The Democrats were generally effective in oiling their Boston dream machine. Their leaders were as assured in their social bromides as the Republicans can be in their evangelical ones.

But whether Kerry, who spoke well and with conviction, succeeded in persuading Americans that “the flag does not belong to any president” is another matter entirely.

At an American convention, the world regresses symbolically from Copernicus to Ptolemy; it is made to seem to revolve around the United States and its leaders, to champion their singular morality and resolve. America is the beacon, the hope and the church of our time.

The problem with this old-hat approach, in 2004, is that George W. Bush is more at home with the sectarian passion and lyrical patriotism that has come to define the United States since Sept. 11. The events of that day scalded a flag onto a Texas governor who was, by history’s happenstance, uniquely gifted to absorb and manipulate the day-after reactionary branding.

In the trench warfare that defined the 2000 campaign, Bush nearly lost. He didn’t because his Democratic adversary was wooden, uninspiring and unwisely spurned the aid of the party’s only true (if tainted) superstar, Bill Clinton.

Clinton has since been re-enlisted by the Democrats and wrapped Boston around his rhetorical forays. But the affectionate tumult that greeted him – no figure, including Kerry, received such sustained adulation – again demonstrated the shortcomings of charisma Clinton’s party has suffered through since the Democrats’ hallmark 1992 campaign.

Few doubt that John Kerry is a good man, eloquent and intellectually pensive, yet he fits more certainly in the genetic mold of Walter Mondale or Hubert Humphrey, not of Clinton, who possessed bravado, originality and a gift of wit and repartee unseen since the days of JFK. Kerry is attracted by complexity (a low-keyed admission in his acceptance speech) but is also eager to please, which accounts for the flip-flop congressional voting record that headhunting Republicans have pounced on with unfettered glee.

Much has been made by Democrats of Kerry’s Vietnam war record — Kerry served, Bush did not — but this sound-bite imposition of patriotism seems compensatory, and voters are likely to see it as such. Bush may not have served in a war (few modern presidents have), but he has picked fights and orchestrated them with what Americans may see as devoted and rudely unyielding aplomb. Kerry will not win this election on his war record.

Moreover, the color of patriotism itself has undergone profound changes since 2001, so much so that once-progressive Democrats now consider it politically suicidal to challenge the Iraq mission in substance. All the Democrats can do (strength is their buzz-word) is to propose a broader global consensus than the one sought by the Bush team, thereby internationalizing the conflict. The direct challenge to the war offered by Howard Dean earlier this year has been pushed aside. The Dean of the convention, hardly reported, was a shade of his February self.

Fear of further terrorist attacks on American soil has been so institutionalized as to make threat into threat, displacing reason with controlled hysteria. Dissenters are either academic self-haters or outright apologists. Debate over the motivation of terrorists and the significance of their loathing has been relegated to the Democratic intellectual class, from which Kerry’s strategists seek to distance themselves.

What this means is that the race for the White House will be handled within the context of the de facto extremism defined and developed by Bush. Foreign policy positions will be debated, of course, but within realities circumscribed by Bush’s advisers. It will be Bush’s world, and word, to disprove, not Kerry’s.

And open disproving, to say that Bush’s vision is arrogant, proselytizing and isolationist, is unlikely to find an avenue because the president’s strongest suit is his unwaveringly assured belief in himself, and his representation as the unique purveyor of American blue-collar will (Those watching the Kerry speech with me at times called him a “dumb fuck,” a “commie,” and a “liberal idiot.”) In a time of war, such raw feelings place an adversary in the unenviable position of having to doubt not only the president but also a system of methods wholly Made in the USA. Policy becomes an American truck, and you do not trash an American truck.

While the country has a significant contingent of voters who are viscerally troubled by Bush’s anti-sophistication (to “dumb fuck” Kerry they respond “arrogant Nazi” Bush) they are largely confined to states with university-educated urban populations – New York and California, for example – that cannot alone turn the tide of an election (Al Gore won both states and lost, however controversially).

More than ever, America is a conservative nation whose loudest and most strident public voices embrace the idea that Sept. 11 was a signal to the world’s most powerful nation that it must forcibly export its social franchise or face destruction by heinous enemies who exist to tear asunder the United States. “They” (whether North Korea or Iran, Al Qaeda or Hamas) understand only force. This approach is not so much stated as heralded, for this is a time of heralds and of embellishment, of bellicose idealism that wishes to coerce compliance. Even if Kerry wished to remove bullying from the strategic picture, it’s unlikely the legacy would abate gently.

The rage heaped on those who dissent from Bush unilateralism – which trumpets only one kind of right but asks that Americans fear many kinds of wrong – rivals the kind segregationists dumped on their rivals five decades ago, or that anti-evolutionists of a previous era brought to bear at the Scopes Trial. It is poignant, self-righteous and perilously confident. It wishes to hang “do not enter” signs on the doorstep of nations that recoil from Washington’s exacting view of freedom, threatening those that fail to change.

In Boston, the Democrats mostly sidestepped this extraordinary minefield (though Kerry did say, significantly, that he believed America was on God’s side, not the other way around; a subtle bit of secularism Clinton has promoted lately).

But otherwise the Democratic refinements hinged on social responsibility (incorporating science – read stem cell research – into policy), economic equality and racial harmony, and on the unremarkable idea (in a polarized nation) that electing a Democratic president is an express train to American unity. “Help is on the way” is Kerry’s slogan, clearly generated for domestic-issue consumption. The inclusive act of offering help to all, while politically noble, backfires into an ironic liability if the sitting president chooses to attack his challenger by portraying him as a man who wishes to be all things to all people, and thus lacks a sense of the focus required by a “time of war,” particularly if the incumbent started the war.

The transfer of the once-static and defensive idea of national security into a forward engine, one that promotes increased homeland security a luminous national advance, skews most modern definitions of human progress. It nurtures the “threat as threat” culture and persuades believers that to preemptively offend is a realistic means to make everyone more secure and less afraid. It has no use for the “complexities” involved in knowing enemies exist for a reason, and that those reasons, however disagreeable, should be addressed in concert with both friendly and enemy nations. Such a monolithic view, with Bush as its battering ram, is less interested, say, in why the world is getting colder and more inhospitable, preferring to buy heat pump stock while accumulating as many overcoats as are necessary to ward off the freeze.

Kerry, too, must wear an overcoat. His campaign will limit risk-taking because risk itself has become a liability, a demonstration of weakness. Conformity is not a choice but a modern challenge. Dissent is not a democratic necessity but a liability. With communism, Americans were trained to fathom the competing system and learned to hate and pity it. With Islamic terrorism, because it inflicted wounds on American ground as communism never did, patriotism is advertised as both a scientific antidote and a condition of spirit.

Whatever the inadequacies of the U.S. economy, this is the nail Bush will hit hardest when his turn soon comes at the Republican convention in New York City. Notwithstanding congressional findings that have assailed the inadequacy of American intelligence agencies before Sept. 11 and concluded Saddam Hussein was not scheming with Al Qaeda, Bush will stake the farm on himself and his armies.

He will champion strength. He will implicitly disparage compromise. He will stress blunt as good. He will parry the act of action as the worthiest of achievements. He will remind anyone listening that he many times said the war, or wars, against American enemies would be lengthy. He will, as he has for these years, invite belief in his conviction and resolve. His is the dumb but convincing lucidity of a man who knows he must be right, talking to those attracted to the muses of certainty — not always because they like them, but because in America the sheriff outranks the teacher.

And the sheriff bats last.