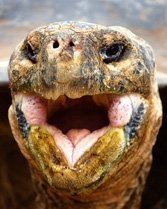 200-years is world enough and time.
I

f anyone were to ask me if I followed a specific religion, I would immediately say I am Dahlian. “The Wonderful Story of Henry Sugar and Six More” has been my bible since my parents gave it to me on my eighth birthday. My paperback copy is more than dog-eared — the cover held in place by tape and the corners of most pages have fallen off. The photo section is long gone. The book’s seven stories were read and cherished in the hope that someone would spot my long and dexterous fingers. I tried to teach myself to concentrate á la Henry Sugar, and whenever I went to the zoo, I talked to the animals. In a nutshell, I was looking for a wonderful story.

I got one. A few years ago, a friend of a friend found himself bored and lonely in his urban jungle, so he decided to make a commitment. He headed to the pet store where he was captivated by a tiny turtle alone on a rock in the middle of a display.

But it wasn’t the turtle’s growth that was off, said the vet, handing a note to his assistant. The turtle was not the commonplace Red-eared Slider nor the standard Florida Cooter. Instead, it was a hyper-endangered Galapagos tortoise, whose specs include a 200-year life-expectancy, a size of up to 1.2 meters, a weight of 300 kilograms — and a fine of $100,000 with jail time if you possess one, which is illegal. Did the man have any idea, asked the vet?

When the police arrived, the man emphatically explained that “no,” he had no idea what he’d come on to. He did however have a receipt for the purchase of the turtle. The small piece of paper led police to find a ring of international turtle smugglers that poached freshly-hatched Galapagos tortoises for eager American clients.

With the perpetrators found and put away, the young man knew that his tortoise would be sent to an endangered-species home far away from him. The thought was depressing. The tortoise was his friend, a veritable partner in crime.

The young man took a chance and asked the officials (he was now dealing with local, state, federal and international governments) if he could keep his friend. The idea was almost absurd, had it not been for the young man’s promise that his tortoise would be provided for and looked after for its entire life. He had drawn up a will which stated a designated trustee for the tortoise to be assigned for each passing generation. Each trustee for each generation, starting with the young man, would take courses in the history and care of the endangered reptile so that it could live its 200 years to the fullest. The officials were convinced, and tortoise and man returned to their urban jungle, together again.

If you happen to be in Chevy Chase, Maryland after 4 p.m., look carefully around the parks and you may notice a man walking a large tortoise. A living, breathing Roald Dahl story, which ends with children in one room and a tortoise sleeping on the sandy floor of his own room in a suburban split level.