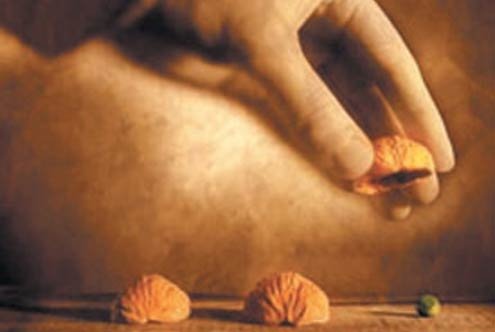 A good shell man rarely loses. Same with a tax system.
B

eing an American taxpayer is like being a shell game mark. Just when you think you have the tax system figured out, authorities move the pea and you’re out the money you put in.

In early January, the U.S. National Taxpayer Advocate, in her annual report to Congress, reported close to 5,000 changes to the tax code since 2001, an average of more than one a day. Constant change, she noted, “obscures comprehension, leaving many taxpayers unaware how their taxes are computed and what rate of taxes they pay.”

If you’re unfamiliar with the shell game swindle, it involves a skilled operative putting three shells on a flat surface together with a pea-sized object. The shell man covers the object with one shell and moves the shells around quickly under the gaze of you, the “mark.” You put your money down on the shell you think will contain the object when moving stops.

But a good shell man rarely loses. He relies on your confidence in your own skills and your belief that the game is fair. The shell man knows he can confuse the mark because he can move the object faster than the human eye can follow. He also knows he has back-up: two or three “shills,” people who surround the mark, encouraging him to bet, pretending to bet as well, and then, should he win and leave the game, following him to retrieve the winnings either by intimidation or outright theft.

Governments play their own game. They intercede in the economies they serve through monetary and fiscal policies. With the U.S. national debt over $16 trillion, exceeding GDP, the U.S. Treasury has taken the expansionary strategy of printing money and buying its own bonds at a furious pace. The monetary effect is to keep interest rates down to stimulate growth and employment.

Congress wields the fiscal sword, having exclusive power under Article I of the Constitution to spend and tax — and borrow (if necessary) to pay for spending. With all the recent hand-wringing about spending cuts and debt limits, these powers have remained unchecked. Instead, higher taxes were passed on Jan. 1 to go into effect that same day.

Italy’s situation is even less appealing. With a national debt that hovers around 120 percent of GDP, the country responded through austerity measures. Government spending has since been reined in and — no surprise — a host of new taxes introduced. The result has been a 1.9 percent reduction in the national debt at the cost of negative growth over the last two quarters of 2012.

Are governments intentionally playing the shell game with taxpayers? Intent doesn’t matter. With their backs up against economic walls and political lives at stake, the effect is the same. The taxpayer is the sure mark and tax agencies the natural born shills.

Beginning in 2013 all U.S. taxpayers will face a 2 percent increase in social security and self-employment payroll taxes of up to $133,700 in net earnings. Higher income levels will mean higher rates, the phasing out of personal exemptions, the elimination of up to 80 percent of itemized deductions, a 3.8 percent tax on net investment income, as well as a 5 percent increase on long-term capital gains and a 0.9 percent Medicare tax surcharge.

In 2010, Italy introduced a program to infer an individual’s income from his or her spending habits. In 2012 the country came up with new taxes for residents based on assets held outside of the country. They now pay (0.1 percent for 2012 and 0.15 percent starting in 2013) on investments and (0.76 percent) on real property. As of July 2013, value added tax (VAT) will have gone up 2 percent in the space of a year. Audits are more frequent and penalties are high for failing to report.

Not to be outdone, the IRS recently announced final regulations implementing terms of the Foreign Account Tax Compliance Act (FACTA), reported on previously in this column (“Amnesty Way” and “Checkmate, we lose”). The legislation is intended to help the IRS fight tax evasion by U.S. citizens and residents holding foreign assets. It is designed to encourage an array of non-American financial institutions to implement new requirements for the identification of their U.S. account holders so that they can be reported directly to the IRS or to their own governments acting as intermediaries.

Though the squeeze is on, U.S. taxpayers have seen at least a few dark clouds vanish. Those who have been out of the tax system but who have IRS bills of $1,500 or less for each of the past three years can get back into the system’s good graces by doing three things: filing tax returns for those years, filing the past six years of any non-filed Reports of Foreign Bank and Financial Accounts (FBAR) — forms that cover assets and signatory authority in foreign banks, and paying any outstanding taxes that might be due. The IRS says it will expedite the review of these returns and withhold penalties.

Another ray of tax sunshine is that the estate and gift unified exemption of $5 million on the transfer of assets was made “permanent.” The exemption will be indexed annually upward for inflation and will allow for “portability”; the unused portion of a deceased spouse’s exemption may be added to the surviving spouse’s exemption.

As for Italy, there’s not a wisp of good news in sight.