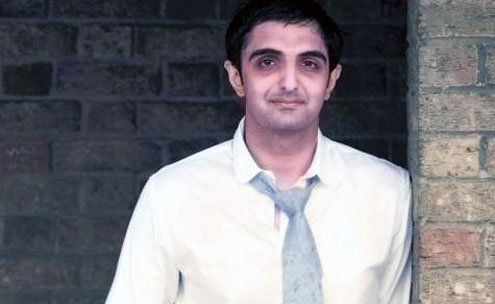 Sunjeev Sahota was born in 1981 in Derbyshire and continues to live in the area.
E

xpect scattered body parts and a devastated market mall. For there’s a powerful new talent seething in Sunjeev Sahota’s debut novel “Ours are the Streets.” He’s serving up a bitterly mordant take on disaffected Muslim immigrants in England, and what disaffection can produce. Easy to consider similar chagrin in other Western lands, maybe your own.

Imtiaz Raina, Sahota’s 20-year-old second gen Paki narrator, rages against Britain’s treatment of its Muslim community. His letter-novel startles by its raw mix of paralyzing emotional despair and unforgiving anger. It traces his own transformation from moderate Sheffield Muslim to Jihad-compliant fundamentalist. Like many in his Islamic community he blames the adopted country for failed integration.

Their conclusion? Britain must and will be punished… by its homegrown suicide bombers.

Here’s Imtiaz, detailing his voyage from British Mosque to radicalization in Pakistan and the mountainous borders of Afghanistan beyond. In these pages he addresses: his immigrant mother (his Ammi); Rebecca, his estranged English wife; Noor, his baby daughter; and even his recently dead father (his Abba). He wants them to understand why he chose the jihad, to “avenge our brethren.” Now a warrior fundamentalist, he calls this account “a kind of “du’a”: a form of prayer. His family will read it, after he dons the tailor-prepared suicide vest and enters local Meadowbrook Mall. Becoming a burst of flames.

Shrewdly, Sahota moves this tale on two levels. One, as a sensitive exploration of the road to Islamic radicalization and internationally organized terrorist attacks. Two, as a blatant exploitation of Western terror regarding local, radicalized fundamentalist population.

Imtiaz’s point of no return comes after his Abba’s death, when he and his mother accompany the burial coffin to his parents’ native Paki village. He leaves Sheffield a jeans and sweatshirt youth. At return, he wears a beard, fez, and pajama pants. For in this Paki village of grinding, country poverty he experiences bonding tribal love and respect, and a thrilling sense of finding his “right place.” His Abba’s body is deeply mourned by all. Here Imtiaz feels he “can belong.”

Almost. For he is constantly challenged by Aaqil — the village radical — to be “a real Muslim.” Longing for the gift of total acceptance, he travels with Aaqil to Afghanistan. To meet with a Jihadist teacher. Aaqil is ready to “die for Allah.” Is Imitiaz also a “true son of the faith?” Or not?

Sahota bases Imitiaz’s deadly answer on the youth’s confused despair and failed identity. He’s already built the case for his narrator’s pre-Pakistan sense of shame and loneliness. Raina parents are by-the-book religionists. His Ammi wears a hijab; only the eye slits reveal a presence. In more than 20 years, both Ammi and Abba have acquired only very basic English speech, but have never learned to read the language. They have no desire to move within the English community. Like, Imtiaz, they believe even that even casual embarrassment is a result of English bigotry and disdain.

For his part, Imtiaz is so socially disoriented — or unmotivated? — that he leaves university study his Abba dreamed for him. While on campus he did meet white student Rebecca, who later had his child. He married her after she became a Muslim “revert.” This last is a key word in grasping mindset. Since Muslim theology establishes Allah as the one true God for all time, becoming Muslim is never “converting”; it’s a “revert” to the only Truth. Non-Muslims are Infidels. Such theology makes “belonging” to Western culture a forbidding — if not nearly forbidden — task.

Imtiaz speaks (and writes) a semi-dialect. It marks him as “not British.” And must have challenged any university studies. Whether or not this “dialect” resembles Sheffield immigrant speech doesn’t matter. The truth-meter for fiction is that voices provide unobtrusive but suggestive language. And Sahota’s choice introduces a convincing and compelling sense of intimacy with the narrator. His dialogue rings right. The story arc flashes back and forth in an engrossingly synchronized pattern.

Yet, at story close, a disconcerting question remains: To what extent are these first and second gen characters “outsiders” by choice? Sahota offers no answer. In the dark night preceding his pre-suicide dawn prayer, the emotionally torn and now seriously paranoiac youth suffers phantasmagoric fantasies. Envisioning the already dead Aaqil urging him on, and his separated wife Rebecca trying to stop him. But when dawn arrives, he dons his bomb-pocketed vest.

What remains is a menace and promise: that social despair is fertile ground for radical proselytizing. If they provide no solutions, these pages certainly offer the West an all-ears bomb-alert.