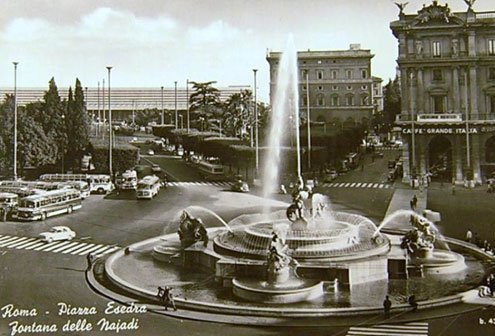 here were lost elephants in my time of manners. And vanished big cats. Nothing like the latest news out of Crotona, deep in Italy’s charcoaled south, where a circus-master let an elephant loose to promote a smallish big-top. He apologized and was fined. Or maybe he didn’t and paid a bribe.

The July and August of my Roman memory, part real, part conjured, reveled in animal mishaps. Loud and brawny circuses of the kind Fellini captured in “La Strada” set up Herculean tents on the outskirts of town, hoping to snare customers from the bored-silly capital. Shows began in the evening, when the sun was less catchy. Jackals played cards in the afternoon, or so the child in me imagined.

Twice in pre-time, which for me means before 1975, when I visited Rome instead of living in it, elephants got loose in Rome. One of them broke free from his moorings, his handler asleep, and prowled through central piazzas at dawn. Overdressed police with narcotic darts confronted the elephant, which yawned once “subdued.”

Another time a handler lost his way to a big-top venue and marched his elephants along a road he did know (the Via Flaminia) footprints and dung (which children marveled at) conspiring to disturb the melting asphalt.

He’d confused east with west and panicked, he told police. So he took the road he knew, trying to find his way before dawn. Papers published photos of the elephants on the same page as the vacationing pope. The leftist mayor, whose name was Hugo, made a joke about beasts and burdens.

At the time, people wore ties to dinner. They never boasted about cheating, which was then considered crass. Not being obvious mattered, which is perhaps why the elephants stood out.

There’s also the matter of the escaped circus tiger, or maybe the leopard. I don’t remember big cat’s tribe, just that the she found her way into Piazza Esedra. Once there, she lapped up water from the fountain and snacked on tempting detritus. “La tigra si mangia Roma,” blared one afternoon paper — “The She-cat Devours Rome,” another case of fantasy over matter, a Roman intoxication. Sated, the dreaded she-cat sat down, and, like the elephant before, was prodded home, such as it was, where she apparently played a submissive role in the summer circus’s main event, which also involved tiny acrobats.

“She-tiger Catherine subdued by tearful handler” was the gist of the day-after story. He apologized and was fined. Or didn’t and paid a bribe.

Once, a truck full of clowns broke down in a small van near the Quirinale Palace, which is where the president lives, except in the summer months, when he’s elsewhere, or wants to be. The dumpy van got a flat tire that the clowns themselves repairing, leading the Rome daily newspaper Il Messaggero to publish a puzzling image of a clown wielding a lug wrench. I remember the caption, which stated (predictably enough) that the clown in the photo was “not clowning around.”

Summer once even tranquilized deviousness. In Naples, in July, a train station thief stole my father’s wallet, with his passport and a few other documents — there were very few essential documents then. Being an American in Italy was a passport of its own, a water-parter. He nonetheless cursed Italy, the station, Naples, all this in snarling but lovely Italian, a language he loved as much as he did the country’s rough edges.

The trip from Naples to Rome took us many hours, much of it spent stilled between one nowhere and another, bodies made goopy by the vindictive fever the south promotes as sunshine. There was of course no air conditioning. Nuns sat beside fanned granddames, the lolling yin-yang of little complaints shushing me to sleep.

In the time of manners, thieves were different, or so it seemed to me. A few weeks after Naples our portiere, or custodian, a squat bear-of-a-man who manufactured perspiration, came to our the door with an hand-sent envelope that had been accepted by his wife Rosa while he was sleeping. Rosa hadn’t recognized its carrier; she was also illiterate. In it was my father’s wallet, the money gone but the documents untouched.

That the world has been derailed from such gallantry, is, I’m told, a false assumption. I’m just older and jaded.

At the same time I witness less gallantry, read about fewer lug-clowns, weeping elephant handlers, hear less about thieves better able to steal than rob. She-cats are fewer. Even summer is more businesslike. “Climate-makers,” or air conditioners, tame the vapors. All the jackals have stopped playing cards, their text pads busy, the Queen of Hearts left on a stump, its oval tan left to darken.