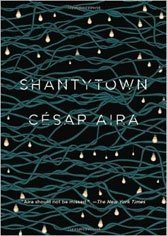 By Cesar Aira, translated from the Spanish by Chris Andrews

Rarely is the prolific, mind-spinning César Aira too clever for his own good, but this convoluted 2001 fable triggered by Argentina’s late-1990s financial chaos falls into that uncharacteristic category. It introduces Maxi, a gentle giant and semi-somnambulist middle class dimwit who takes pleasure in helping out the residents of a Buenos Aires shantytown. No sooner has Aira sculpted Maxi than he introduces his opportunistic sister Vanessa, his sister’s friend Jessica, a local maid who may or may not be a figment of Maxi’s imagination, a crooked cop who pretends to be the father of a girl murdered by shantytown drug lords, and a crusading judge with her own private army.

These outlandish figures, big and little rogues, pirouette around each other in the service of a murder mystery heavy on comic and frivolous asides and all dependent on parody (the “dubious privilege” of bourgeois values and TV sensationalism take a major hit: “…television — which is the essence of action and therefore never wrong.”) Aira’s Keystone Kops convolution is intentional, of course, with chaos and confusion as the animus of a society coming apart at the dreamed-up seams.

By playing to this overload, Aira tries gashing the urban world’s messy lining, with the Magritte-inspired oval shantytown both its seepage and black hole (“…this enormous ring belonged to the unconscious.”) Occasionally, though, magical realism isn’t up to metaphor’s burdens and vice versa, and Aira’s hallucinogenic ambition is undone by too much of too much. “There may be a limit to the quandaries that a mind can accommodate,” says Jessica, and here the mind is granted access to a magical kingdom that eventually OD’s on itself.