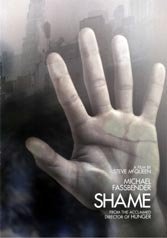 Knee-deep into British director Steve McQueen’s desperate landscape, a woman that yuppie yes-man Brandon (Micheal Fassbender) is determined to seduce asks him what he would have liked to have been instead of a corporate lackey. Maybe a musician in the 1960s, replies Brandon. It’s apt that tightly wound sex-addict Brandon would see himself as Jimi Hendrix or Pete Townshend, a front man who smashes guitars and is serviced by pliant, adoring groupies. Trouble is, Brandon is the opposite. He’s a late 30s nobody in an upscale Manhattan workplace awash in lies. He depends on facades and can’t fathom more than incidental compassion. His office hard drive is chock with porn and he masturbates in the men’s room. Outside the office, proof of life is a parade of hookers whom he pays to pillage. Give him affection and his erection disappoints. Manipulation and randomness fuel his ferocity.

This repetitive drudgery, which the full-throttle Fassbender makes painfully credible, grows even bleaker with the introduction of Brandon’s damaged sister Sissy (Carey Mulligan), a kind of starved Weimar creature who can sing like a dream but aspires to suicide. When fragile Sissy moves into Brandon’s upscale apartment, he’s confused, cornered, and enraged, in that order. The only response he knows is binge-fucking.

Watching “Shame” is like watching a man plunging headlong into an empty swimming pool. The act itself so sudden and shocking that it disarms any effort to stop it, or even, shamefully, to want to stop it, which is of course McQueen’s cinematic intention (Fassbender and McQueen last collaborated on “Hunger” in 2007). Easy answers are meaningless to McQueen. Brandon is automaton-like, incapable of relying on heart for any length of time. He’s a loner sick with overload, the Manhattan male malady that Travis Bickle of “Taxi Driver” pioneered decades ago. For controlled Brandon and messy Sissy, basic instincts come first, followed by dubious apology and half-hearted damage control. It’s an extreme view of contemporary New York, a low-boil “American Psycho” in which the reckless penis stands in for blade and dagger.