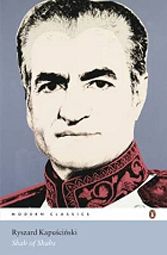 By Ryszard Kapuscinski, translated from the Polish by William R. Brand and Katarzyna Mroczkowska-Brand

This is not an easy book. In fact, it is Kapuscinski’s most enigmatic. Ostensibly an account of the fall of the Shah of Iran in 1978, it is in fact an apprehensive reflection on the sourness of all authoritarian power.

Part of the reason for the bothered tone may be Kapuscinski’s displacement from Africa, where he navigates with preternatural authority, and the fact he did not witness the Iranian revolution first-hand, arriving only after Ayatollah Ruhollah Khomeini’s ascension. In the first section he uses old photographs as cue cards to recount the Shah’s history and despotic abuses — an enchanted device in Kapuscinski’s hands (the secret police SAVAK is “a monstrously overgrown cephalopod.”)

The second and more urgent part is rumination on the meaning of revolution and the irresistible but irrational power of the mob. In it, Kapuscinski forages for metaphor: revolt is a predatory animal, the state is a roly-poly toy, the Shah is a theater director who loses script and cannot ad lib lines (“The black flags of the Shiites appear on stage.”). The Shah is a “rejected transplant” who foolishly sunders his villages.

While Kapuscinski’s African texts invariably mine idealism from insurrection, that doesn’t happen here. The new folk are “bearded, barely literate oafs” from a “B-film in a cheap, unswept cinema.” What emerges is palpable resignation, but never at the expense of insight: “As long as the son who has moved to the city visits his native village a few years as if it were some exotic land, the nation to which he belongs will never be modern.”