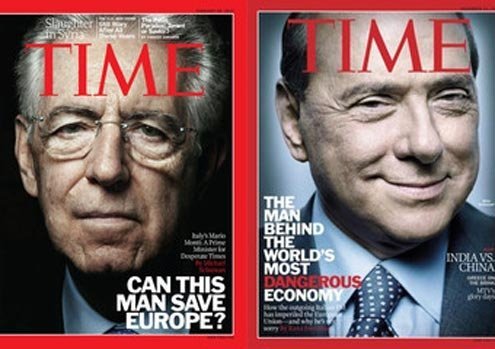 Time's approach to Monti, left, and to Berlusconi, couldn't be more different.
W

hile the new face of Italy — Prime Minister Mario Monti — has been calling on U.S. President Barack Obama on his victory lap tour, the old face of Italy — Silvio Berlusconi — has also been busy. He’s been hard at work on a new screenplay for his post-Monti role, with help from co-writers in the foreign press.

Berlusconi recently granted the first interviews since his November resignation to the very kind of preachy Anglo-Saxon publication he has always hated; The Atlantic magazine and the Financial Times — sister publication to his sworn enemy, The Economist, a publication he calls the “E-communist” and that in 2011 ran a cover story with the headline, “The man that screwed Italy.”

In the two interviews, Berlusconi reveals familiar flashes of his distinctive personality disorders, including the usual paranoia and blame shifting. He sidesteps attempts to trip him up. “Bunga-bunga,” he said when the Financial Times pressed him on the well-publicized sexual side of his misadventures, is what you say “… after a dinner, rather than saying ‘let’s dance’, people said ‘let’s do some bunga bunga. It means dancing, just like in weddings.” Overall, Berlusconi seems genial, measured and even contrite. He comes off as a simpatico elder statesman who backs Monti’s reforms, hates politics, and won’t seek re-election as prime minister.

And Monti? Of course Berlusconi supports him. When Monti goes, politics will reopen for business. If Monti’s austerity treatment works, party chief will take credit for it. If it doesn’t, they’ll say it was doomed from the start.

And re-election? Of course he’s not seeking it. In fact, he never actually “sought election,” even in 1992 when his Forza Italia Party first came to the forefront (after a recession and financial downturn). At the time, he “stepped forward,” he tells The Atlantic, “…against the advice of all my friends and all my family members…” In 1992, he called it “running onto the playing field” (“scendere in campo“), like a footballer saving his team.

If, over time, the pain of Monti’s reforms produces widespread discontent, Berlusconi can use the tried and true theme of the reluctant leader forced to do his duty. The Atlantic compares him to Roman leader Cincinnatus who returned from retirement on his humble farm to fend off invaders, to which Berlusconi replies, “Eh, certo.”

But it matters less what Berlusconi says about playing elder statesman, than where he says it — in the foreign press. While it’s hard to imagine The New York Times, Bild, El Paìs or The Economist paying much attention to Italian media comments about their respective countries and leaders, Italy has always lapped up the views of outsiders, which Italian newspapers report as news. Monti’s presence on the cover of Time Magazine International immediately made the front page of Milan’s Corriere della Sera. Italy hungers for validation from abroad.

The Atlantic and FT writers didn’t flatter Berlusconi. On the contrary, they took potshots at his taste in interior decoration and the “thick make-up, and dyed chestnut hair, [that] cannot hide his true mileage.”

But none of this matters to him or to Italians. What does is that interviews made news in Italy and were repeatedly mentioned in television news reports and talk shows. Berlusconi’s newspaper Il Giornale printed extensive excerpts of The Atlantic interview, minus the snarkiest bits, and glowingly described The Atlantic as “prestigious.” Reading these in their Italian translation, it’s hard not to wonder who wrote them, a right-wing Italian newspaper or the house organ of American liberalism?

Yet again it doesn’t matter, not in Italian political terms.

The only job available to elder statesman in Italy is the presidency — the head of the Italian state, now held by Giorgio Napolitano, who turns 87 in June. His term runs through the middle of next year. It’s a longstanding open secret that Berlusconi covets the job. The position traditionally goes to an elder institutional figure seen as above the fray of party politics. Napolitano was preceded by Carlo Azeglio Ciampi, a former Bank of Italy governor and prime minister, the kind of person who looks good in the Financial Times.

Candidates for the Italian presidency are nominated and elected by the Italian parliament, not the public, which has no direct say in the process. When Berlusconi grudgingly stepped down in November 2011, he still maintained a slim parliamentary majority. To capture the presidency, he must win two-thirds of a special vote of both houses of parliament, specifically convened to elect the president. Given his financial and personal resources this hardly seems a problem. As he told The Atlantic, “My style as a manager and political leader has always been based on persuasion, not force. I don’t know how to give orders. I know how to convince.”