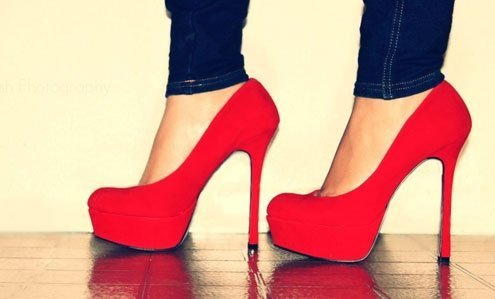 Getting stilettos in Rome doesn't come with sales clerks asking how your day has been so far.
J

ust after Christmas, I spent an afternoon shopping with a hired Czech escort desperate to buy a pair of red stiletto shoes in Rome. She was in my keep for an afternoon, her upscale Italian handler dishing her off because they lacked a non-sexual language. She spoke English. He spoke Italian. I spoke both. Bingo. “You do the shoes, then we’ll all have dinner,” my male friend told me, and that’s just what happened.

But not before we spent several hours at shoe stores, department stores, boutiques and even a bank. By evening, she’d found red shoes (and black), and several other expensive items that were packed in four bags, two of which I carried. In all, she spent €5,200, about $7,000. Almost all of the purchases were in cash, including my first-ever sighting of a wad of €500 notes.

I hadn’t shopped in Rome for myself or with anyone in years. At the stores, the salesclerks, mostly women, varied between the disinterested and the hostile. She ignored them. At the bank, one teller’s distraction held us up for 30 minutes. She was unbothered. “I like it when they don’t like me or don’t care,” she told me. “It feels more commercial. It feels like they don’t want to be doing what they’re doing and they don’t hide it. It’s fine. They probably envy me.”

Since she was earning $5,000 a day plus expenses, perhaps they did, if they even knew. Rome is filled with luxury women and the men who buy them. Shoes and companionship are the laconic components of a commonplace transaction.

I didn’t think much about that afternoon and evening, which lasted six hours in all, until I returned to the United States for my annual visit.

If Rome is the capital of salesclerk ennui bordering on cynicism (if not hostility), urban and suburban America is the capital of enjoined cheerfulness and inflicted gratitude. Since America has always reveled in laugh tracks it’s no surprise many businesses now make it a point of being egregiously thankful for you, your business, and seemingly concerned about the state of your soul —which would all be quite sweet if the uniformity of pleasantness wasn’t mass-produced like the worst of Christmas.

Yesterday for example I went to the bank. Not my bank, just a bank. I needed quarters for a parking meter. A man who thanked me for coming to that bank greeted me and asked me how I was. Next came a clerk who inquired about the state of my day so far. Finally, a second greeter asked me if I’d gotten what I wanted and found the service to my liking. His bank, he told me, was grateful for my patronage — all this for a role of quarters.

I fed the meter and went to the grocery store. There, yet another greeter welcomed me. “Do you know where everything is?” she asked. I said I didn’t but that I’d find out. She offered to help. I declined. At checkout, the clerk asked me if I’d found all I’d been searching for. I nodded, though mischievously inclined to ask if they stocked giraffe hoofs. “You have a good one,” I was told.

At my next stop, the drug store, the festive interference seemed thankfully absent – until I approached the cold medicine (amazed at the ever-increasing variety), at which point a pharmacist appeared and asked if I needed help, hoping I didn’t have a cold. I nodded no on both counts and fled.

Supplementary graciousness is a mixed blessing. So are feigned nice wishes. They’re contrivances intended to humanize the gap between commerce and the citizenry that fuels it. They’re also means to give shopping a feel-good dimension, particularly as lazy or socially uneasy people move from centuries of store life to online purchases, which like so many other wondrous technical solutions are bereft of commonplace human interaction. That bereft-ness is nurturing a drummed-in “thank you” culture whose scripted spontaneity tends to make unfettered graciousness harder to measure (just as heroes are now a dime a dozen).

Is it nice that so many people are nice? Yes. Are they nice because their manners and sensibility dictate sensitivity toward others? Not so much. “The struggle for existence,” businessman-turned-writer Hermann Broch once wrote, “is implicit in every sales price,” and perhaps in every greeting, too.

Granted, we’re a long way from Marx and Teutonic melancholy, and most of the trading planet seems glad for its billfold festivities. Which may be why an afternoon spent on loan to a Czech escort has its own value, if only to remind a skeptic that — trimmings aside — most life concerns transactions.