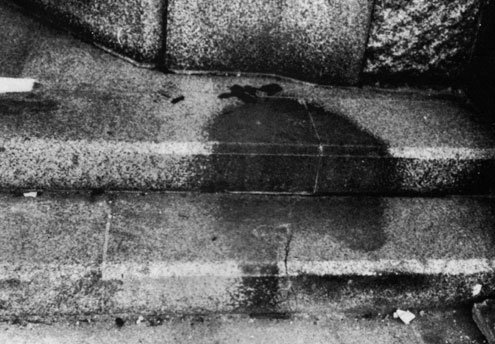 Hiroshima: etched cinders of an incinerated self.
W

hen people once asked me what I believed in I’d say I was a Christian existentialist, like Albert Camus. Except that I’d never read Camus. He’d been a guest at a few of my parents’ Paris soirees and won a Nobel Prize, so I dusted off his dinner jacket and wore him as a badge of honor.

The choice suited the times. Existentialism, as old as Kierkegaard, had returned to prominence in France of the early 1950s as European thinkers foraged for postwar context while faced with the Hiroshima-driven prospect of nuclear annihilation.

All bets were off. Mankind could now cremate itself at a moment’s notice. No philosophy or psychology had ever factored literal self-destruction into its reflective calculus.

The atomic bomb and its meaner successors wired postwar writers to go the extra mile in pondering the absurd. An affluent species in love with itself and eager to endure had somehow managed to conjure up an endgame.

Many young writers sketched out characters to embody the paradox. One was lovesick painter Juan Pablo Castel, the narrator of Argentine physicist-turned-novelist Ernesto Sabato’s 1948 “The Tunnel.” The imprisoned Castel must explain why he murdered the woman who obsessed him — an appalling but inarguable affirmation. “There are times I feel nothing has meaning, ” he says. “On a tiny planet that has been racing for oblivion for millions of years, we are born amid sorrow; we grow, we struggle, we grow ill, we suffer, we make others suffer, we cry out, we die, others die, and new beings are born to begin the senseless comedy all over again.”

To Sabato (and Camus), being human after Auschwitz and among A-Bombs ridiculed narcissism. Authenticity could derive only from individual action unfettered by the suffocating hypocrisies of social or religious convention. Fitting in meant standing out, or standing separately.

My own Christian existentialism, though focused on the value of decency, rejected the idea of a transcendent “self” tied to a lasting, righteous human project. To me, emotions, sentiments, and spiritual revelations were real but transitory. Existence was finite. You lived deed-by-deed, after which it ended. No afterlife in the bargain.

Similarly, postwar existentialism mocked vanity and noble choices, since choice and nobility seemed ludicrous in the wake of death camps and nuclear shadows, the detritus of atomized humans etched into Hiroshima’s walls and stairs.

Mass destruction suddenly meant just that. “Being” answered to awareness that the next war, when it came, would be the last one, and that the “meantime” would be fraught with an anxiety fueled by knowing it.

Slowly, though, anxiety has regressed from the daunting into platitudes. It’s been years since anyone asked me what I believed in. When the question does arise, self-fulfillment is usually formulated sexually, as is suffering.

The spaying of the nuclear menace and “enemy” ideologies has transformed self-orientation into a complex libidinal exercise. Though “commitment” is at best a deeply vague and unreliable word, it is more than ever of central importance, so much so that it’s achieved verb status. The hormonal self is confessional, commercial, impressionable, disdainful of despair, and inclined to debate only in terms of unions and partnerships, a back-and-forth seen to reflect “empowerment” or “ownership,” staples of a classless, consumer-tinted global vocabulary that interprets the 21st-century being above all as a maker of trends and tendencies.

The authentic is visibly about physical competition, with arousal as a publicly marketed commodity engineered to feed esteem. Sexual status and preferences, as they adhere or vary from older norms, are the easiest and most convenient way of establishing social credibility.

Not surprisingly, carnal governance is impatient with Christian existentialism, reckless atheism, or even unreconstructed communism. Sabato’s ruminations about life as a “senseless comedy” would now run the risk of being labeled as clinical depression and instantly medicated.

The landscape speaks the language: This year’s prize-winning film at Cannes is applauded for its compelling and humane portrayal of lesbianism; the U.S. Boy Scouts will now accept gay members, as does the military; gay marriage is debated as if human existence depended on the outcome, which it does to the extent that humans remain social beings in search of tolerance.

The Hiroshima shadows have lifted, with the no-longer-intimate details of mating and sexual belonging taking their place. Vanity has outlasted dejection, existentialism with it. “We have no right to think of ourselves,” says another Sabato character, the woman the painter loves, and kills. “The world is too complex.”

Oral sex is not.

In conversation, I was often asked to qualify the “Christian” in existentialist or to explain how it was I believed that even futility, including depression, could be beautiful, vital, and poetically crucial to emotional intelligence, an essential paradox that stark-hearted Nietzsche first anticipated. Sexual arousal was often a product of such thinking, not vice versa. Discussing gender and the general “awesomeness” of things just wasn’t enough.

After my time as a poseur, I finally read Camus and breathed a sigh of relief. I’d guessed right. We were on the same page, the same one as Sabato. Not a mean or cruel page, but one as chock with human paradoxes as enslaved by physical hydraulics. Yes, lust remained the oxygen, but getting the girl or the boy still flirted with a magical question that began with one word, “Why?”