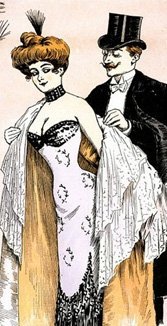 Would you take offense if I had the gall to plant a kiss on this beautiful shoulder? Gerbault, 1901.
S

ome of the first advice I give to American girls new to Rome, whether students or visitors, is to avoid eye contact with Italian men. By this I don’t want to give the impression that Italian men are “bad,” nor do I expect women to start touring the city with their heads bowed down.

My advice is based on cultural responses. Some differences between North American and Latin men aren’t immediately obvious to newly-arrived women. Lack of awareness can make some Italian male behavior actually seem creepy.

I’m not talking about the whole passé Latin Lover thing. I mean instead how some facial expressions and greetings can get lost in translation or be misread. While it’s true some Italian men can be forward (no, many can be forward), it’s important not to judge their advances in terms of right and wrong. “Different” is a better word, but it also requires explaining.

What I share with friends I now share with you. Here are some common mishaps, trite but true. Don’t say I didn’t warn you:

Italian male to American woman on the street: “Buongiorno principessa!”

What he’s thinking: “Fresh bait, I want to shag you.”

She smiles and keeps walking.

Italian male response: She’s flirting. He then decides to follow her for 10 blocks.

Italian male, in a catcall: “Ciao bella. You are very nice girl. I want to marry you.”

What he’s thinking: “I want to kiss you.”

Sometimes women unknowingly project the wrong messages or vibes based on what they wear and how they wear it. Unfair but true. In the male imagination, it’s the “American Girls are Easy” line mixed with an imaginary “College Girls Gone Wild” movie.

Unfortunately, it’s a common American female portrayal. Bad stereotypes exist to be dealt with and overcome. I’m a big believer in staying true to yourself. At the same time I also believe in blending in.

Italian woman: Everyone’s wearing long pants, a trench and a scarf. I’ll do that.

American woman: I’ll wear a sweatshirt, a miniskirt and flip-flops. No tights and no scarf. I’m going to be me.

Italian man: Dressed in suit, a smart trench coat, and scarf. He takes one look at the Italian woman, sees that she knows the rules, and decides to follow the American.

She sticks out, he thinks. She doesn’t know the norm. She’s easy.