Sex and the shifty “I” 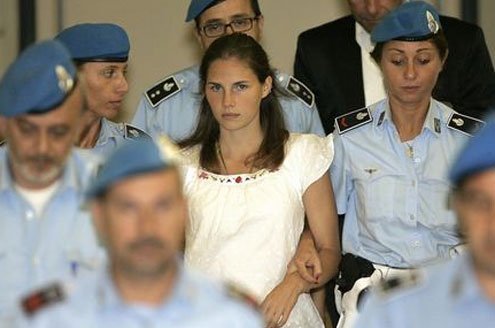 leven years ago, the United States and Europe dissected the sexual scandal then besieging President Bill Clinton. Roughly, the central question had this formulation: Was the focus on Clinton’s infidelity motivated by genuine outrage over deceit and sexual misconduct or were lies and libido merely fig leaves shielding prurient social voyeurism? Short of decrying violence and abuse, was there a single sexual yardstick applicable to all Western societies and cultures?

The question was never properly answered on either side of the Atlantic. Clinton’s second term ended in 2000, and the November election opened a suddenly more compelling Pandora’s Box. Within a year came the Sept. 11 terrorist attacks, shifting the Western social focus from promiscuity to patriotism.

But the passage of time both heals and redirects. The Clinton question is back, this time as a hydra.

The sexual thread tying together Berlusconi, Kercher and Woods begs the Clinton question: Does public interest in celebrity adultery and sexually-charged trials reflect worries about the decay of decency or is it merely water-cooler fuel for a smug citizenry that depends on scandal to look itself in the mirror?

The Italian side gives no one answer. In Italy, views of sexuality are still largely framed by pre-Reformation Catholic tendencies, meaning Berlusconi is something of a renegade. A coarse man who unabashedly advertises his larger-than-life, law-dodging profile, his vernacular would shame Clinton’s. He teased a teenage girl with birthday gifts, attending her party. He entertained a call girl who then wrote a book in praise of his nocturnal endurance. His opulent Sardinian villa enjoyed bacchanal status. Not surprisingly, his second marriage is in tatters.

Yet Berlusconi counterattacked. A man was a man, not a saint, he said, and men had appetites — though he insisted his did not include teenage girls. He’d done no harm. His enemies had scammed his impressionable wife. He was in fact beloved by most Italians.

This relentlessly snarling pique helped blunt the allegations, partly turning them on end. In a country attentive to shrewdness, where playing the victim can be a survival tool, Berlusconi drove home his political virility. In essence, his enemies failed to convince a male-driven, non-Protestant country to take him to task for lack of contrition. Had Clinton counterattacked by trumpeting his statesman’s gifts and reciting the boys-will-be-boys code he would have been buried alive. A Protestant nation tolerates hypocrisies, expects apologies, but commonly buries arrogance.

The Meredith Kercher murder trial by contrast yields insight into how Italy’s sexual compass works when foreigners are involved. British exchange student Kercher was murdered in November 2007 in a rural cottage outside Perugia, which she shared with a fellow student from Seattle, Washington, Amanda Knox.

A year later, Rudy Guede, a 21-year-old drifter and the son of an immigrant from the Ivory Coast was convicted of Kercher’s murder and sentenced to a 30-year prison term. But Knox and her Italian boyfriend remained in the spotlight, with both ultimately convicted a year after Guede. Allegations of sex games — video-animated in court — lathered the story line.

Both British and American tabloid media wasted little time bulldozing into the fray, emphasizing the salacious and often obscuring the machinations of the judicial and cultural divide. (After the Knox verdict, aunt Janet Huff illustrated the gulf: “In jail, she [Knox] heard stories of how things work there [in Italy]. I think she probably knew this was coming.” Meanwhile, one of Washington state’s two U.S. senators, Maria Cantwell, assailed the Italian justice system and suggested possible anti-American bias.)

But until the verdict, the semen-stain inferences that sold papers in the UK struggled for traction in Italy, which doesn’t lack for daily drama. Though national newspapers zealously peddled the trial, and particularly Knox’s sorceress role, their efforts were often hindered by the development of more spectacular domestic luridness — for once not involving Berlusconi.

In October, Piero Marrazzo, the married-with-children president of the Lazio region (which includes Rome) stepped down after confessing to a series of encounters with transsexual prostitutes following the exposing of a blackmail plot against him. The ugly morsels soon multiplied. Once an up-and-coming center-left politician, Marrazzo decided to retreat to a convent. Soon after, “Brenda,” one of the two transsexuals he allegedly met, died in a suspicious fire.

Evidence of the edgier side of Italian sexual activity was a reminder of the country’s cloak-and-dagger resistance to change. Gay sex is still largely off-limits in non-urban Italy. In the years after World War II, many cash-starved Italian youths played pretty gigolos to visiting older men. Southern Italy of the 1940s and 50s was Europe’s San Francisco of the 1980s. As a result, homosexuality and transgender choices continue to fascinate and repulse. They’re a thorn in the thigh of the Latin Lover archetype now forced to deal with the fizzling interplay between homoeroticism and homophobia.

In many respects the Kercher trial reflected this complication, with bigotry and cliché each playing large if unstated roles. According to provincial archetypes, black men are oversexed and dangerous — no wonder then that Kercher was killed by one. Meanwhile, American coeds are Facebook loose — no wonder Knox lurked in the shadows, a sorceress in a kids-will-be-kids story gone wrong.

Adding to the case’s cultural confusion was its delays and breaks. It dragged, or so it seemed to those who don’t know Italian jurisprudence. Newspapers in London and Manchester made hay from the snail’s pace, tossing in Berlusconi for good measure. What good could come from a country in which the prime minister manages to delay his own corruption trials? Once again, Reformation wrath, keen to illustrate dissolution, collided with lacquered Catholic morality, which works to dissipate urgency.

A more interesting case in Clintonesque terms, and in Italian ones, comes from Tiger Woods, the gifted golfer who has lately become every tabloid’s best friend. Involved in an improbable if minor car crash, he was soon portrayed as possibly fleeing a fight with his wife. Rumors of affairs followed, with several women claiming untoward ties. Woods responded with blurry apologies and appeals for privacy.

Golf has no resonance in Italy, and Woods all but unknown. Still, the contours of the story made Woods an ideal antidote to Marrazzo: Here was a successful billionaire with two young children married to an attractive Swedish woman seen as falling into a cataclysmic confrontation with his jealous wife as a result of extra-marital affairs. That the information was sketchy hardly mattered. The mental picture of a raging wife chasing her cheating husband with a golf club had a kinetic verisimilitude that readily conformed to the conventional imagination.

While the Clinton affair was crass (semen stains literally mean dirty laundry) and Berlusconi’s behavior idiosyncratic, and if the Kercher case was the product of bad-seed foreigners, then the Woods story possessed all of Italian voyeurism’s old-school staples: cheating man, wronged wife, infant children, betrayal, rage. The Milan daily Corriere della Sera even featured a Chinese-produced animated video that recreated Woods’ imagined house escape, his club-wielding wife, and the car crash. That Woods’ love affairs were said to involve showgirl-like gold-diggers further fitted the Italian glove. While the Marrazzo incident begged uneasy questions, the Woods affair was a Made-in-Italy transplant.

Back to Clinton. At the height of the Monica Lewinsky scandal, special prosecutor Ken Starr produced a salty report detailing the president’s indiscretions. It wasn’t about sex, he insisted, but gross violations of personal integrity. The details of sexual deceit mattered because one kind of lying couldn’t rule out another, by proxy suggesting the specter of another Watergate.

Outside Washington rhetoric, the debate focused as much on power as sex — just as the Clarence Thomas-Anita Hill showdown had before it. Misconduct by the powerful made some Puritans crazy. Wasn’t Protestantism a response to bad popes, poor governance, and self-indulgence? “I did it because I could,” Clinton said later. The remark further poisoned the water by pooling the envy and disdain that suppurates beneath the American national skin, ready to rupture at a moment’s notice.

But Italy entertains different notions of personal rigor and discretion. It also measures shortcomings by a different set of priorities. Adultery is penny ante. Betraying or abusing a family member is unforgivable.

Americans like the prefatory phrase, “All things being equal.” Realistically, however, there is no level or equal field in the perception of sexual behavior. This awareness should temper if not moot the public rush to one-sized judgement. But it doesn’t, and won’t. The attention paid to the grunting of others is a primordial investment. That there’s no credible rule book just makes the involvement all the more riveting.