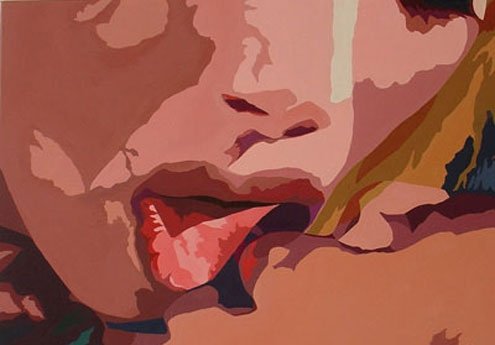 ecause they were adults they met at 8:30 p.m. to pick out wine for dinner together. Because they were mature and had good taste they couldn’t help but feel scalped by restaurant wine lists, so they chose — or rather, she chose — a quaint BYOB seafood place just across the Union Street Bridge that hadn’t been “discovered,” yet, and he agreed.

And because it was a blind date, they were both relieved when they saw one another for the first time.

She’d come from a summer day in the city and wore an off-white sundress with a jean jacket and caramel-colored sling-back heels. Her hair was curling up from the ends and stuck in wisps long her hairline. Her green eyes looked brighter with a little bit or reddish suntan she’d picked up during the afternoon, especially when she smiled.

He was almost a foot taller than she was, and he stood with excellent posture and walked with a casual, confident stride. His hair was shorn close to the scalp as he was balding, and the adult thing to do was to cut it all quite close. After they’d both had something to drink, he stroked the top of his head and blushed a bit. She smiled and told him he looked just right.

His eyes were also green and very round. A few days of stubble lent his face some character.

They chatted through salmon and tuna carpaccio and soft-shell crab. By the time they finished the last drops of wine, the remaining eight tables had long since been abandoned. The server asked if they wanted dessert, and he answered that the check would be fine.

She hadn’t been counting on dessert, but when he barely paused to ask her opinion on the subject, a part of her snapped to attention, and yet a more influential part of her felt a rush of warmth at this minor show of authority, the same heat she felt when he put his hand on her back and guided her through the front of the restaurant, held the door with one arm — above her head — and opened the door to his car and declared, “Should we have a drink somewhere?”

They circled the block a few times in search of something with an outdoor space, and finally settled on a sports bar. They tucked into the less raucous end of the patio and he ordered two beers. There they continued their dinner conversation, and like the adults that they were, never let their glances settle upon one another too soon or laugh too loudly or too easily.

She felt a comfort in such composure. He was being gentlemanly, and she felt like a lady — which was rare for all kinds of reasons.

He told her about his time in the military, and how he eventually ended up working alongside osteopathic surgeons. She told him about her time abroad and how she ended up doing creative marketing for French perfume.

When they’d finished their beers he asked her matter-of-factly where her house was. They drove on silent roads and he pulled into a space right under her building.

She gathered the bags around her feet and reached for the door handle. She gripped it for a moment, and then removed her hand and instead turned to him.

— I had a great time. Thank you. She lowered her eyes.

She put her hand back on the handle,

He leaned into her and pulled her hand away from the door. The hairs around his mouth scratched her, but she didn’t mind at all. His kiss was soft. She pulled back and let him pull her back toward him-and when this second kiss was still soft, she bit his lip. The third time he took the side of her face in his hand and kissed her the way she wanted it — and then pulled back and smiled.

“Oh, she looked at him shyly (or feigning shyness. Sometimes even she didn’t know the difference), and said, “I didn’t want to get out of the car without —

He interrupted, “Making out with me?”

“No! Without kissing you.”

“So kiss me.” And he pulled her close again and undid her seatbelt.

“I suppose I should walk you to your doorstep like a proper gentleman,” he said.

Before she could take two steps, she felt the hot hood of his car against her back and his hand in her hair.

They kissed some more and then stood side by side with the hot metal burning both of their backs. The stars were faintly visible.

“You know, I feel like we’re seventeen,” she sighed.

He traced circles on her hip with his fingertip and said, “Yeah, but I’m very glad we’re not.”