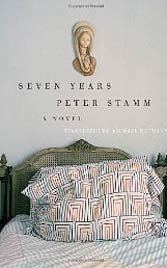 By Peter Stamm, translated from the German by Michael Hoffman

Forty-something Alex lives with his attractive wife Sonia, whom he met at university, and their pretty 10-year-old daughter Sophie in a lakeside house near Munich. The middle-class couple, architects by vocation, is apparently content. But the visit of Sonia’s artist friend from Marseille opens a channel into Alex’s past, which in turn spills into his present, exposing depths of fragility in both husband and wife.

It turns out unsettled Alex has had a two-decade-long, on-and-off relationship with a devoutly submissive Polish Christian woman, Ivona, a laconic cross between martyr and saint. She is the source of a lifetime obsession that cuts into all aspects of his life.

Using Sonia’s fascination with French architect Le Corbusier as an anchor — his phrase “light and shadow reveal form” is the novel’s preamble — Stamm unrolls a portrait of a marriage and details a human blueprint that, as metaphor, affords a look into obvious living spaces while also shedding light on more intimate and improbable nooks and crannies. Slowly, the story becomes the narrative equivalent of a pensive walk-through.

In the story’s living room are Alex and Ivona, he a passive weather-beaten dreamer who prizes skepticism and worries about how people see him (very much a Stamm character), she a childlike and submissive creation faithful to the stubbornness that produces a “poor, arduous and unspectacular” life. Ivona’s immoveable simplicity jointly arouses both Alex’s adoration and his contempt. In self-loathing, he feels a sense “of freedom and protectedness.” For Ivana, being hurt confirms and fulfills her sense of Catholic destiny.

In Stamm’s world, humanity and guilt aren’t religious but “aboriginal” (a haunting word choice); they create bonds that defy understanding.

Ironically, fitting this fundamental subtext into a novel about marriage and the elusiveness of happiness is a deeply spiritual accomplishment, a little like imagining Graham Greene and Albert Camus in vibrant conversation about the nature of love. Despite Stamm’s impatience with “the thin veneer of civilization,” he’s a deeply sensitive and wise writer who produces characters of substance and depth whose foibles come ahead of happy endings.