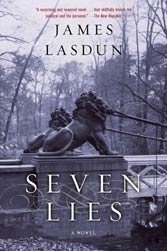 One-time East German “dissident” Stefan Vogel is “appraised by the stones”; even rural trees seem to see him for what he is, a restless Quisling beset by “retroactive fatalism.” When a woman throws wine in his face at a New York City party, shocking him into awareness, he strings together the secrets and lies of a taut life story that stretches from his Communist “bourgeois” upbringing in 1970s East Berlin to America of the mid-1980s and beyond. Now a U.S. citizen living outside New York with his wife Inge, his life on the brink of ruin, Stefan tries to come clean.

Lasdun’s novel is an artfully constructed and lucidly observed literary thriller about a man who plumbs the “self-annihilating” details of a deceitful past to find a no-exit spot midway between sentimental longing and suicidal urges. He’s a pre-1989 straggler whose real personality, if he ever had one, was a contrived piece of Cold War flotsam.

The wine-throwing incident leaves Stefan “…entirely alone to absorb all reverberation of harm.” And the harm is great. An acclaimed but little-known British novelist, Lasdun possesses rare virtuosity in the eliciting and explanation of psychological frailties. Here is a man in the guise of a “parasitical second self” who early in life fell prey to his perceived shortcomings and now accepts the (for him) inevitable consequences of the betrayals he recounts.

Lasdun’s has an arresting moral grip, similar in tone to the best of the late Brian Moore. Add to that the molten prose of a poet, which he is. Arriving in 1980s New York, the Stefan is humbled: “…the Empire State like a great syringe with some fiery elixir of the city vatted within it, the Helmsley in its gold tiara, the Twin Towers reading each other’s paragraphs of light…” But not even such grandness can rescue a pre-defeated man attuned to “the burden of my contagion, my brokenness,” and determined stifle his déjà vu for good.