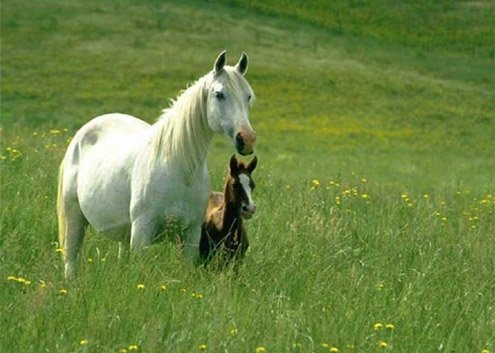 Out of nowhere, a dream comes true.
S

ome people believe in God (whatever they choose to call it) while others rely simply on themselves. Some look toward a guru or believe the universe will provide. Most, however, have never lived in Italy, a country that boasts an extraordinary phenomenon: here, somehow or another, things often work out for the best in the most mysterious ways.

At the same time you have to be careful what you wish for.

Like all fans of movie Westerns, my son began to dream of owning a horse, which soon turned into grand passion. But with five places to spend each euro, I was very careful not to promise him something I couldn’t deliver.

My son was used to people giving us things. We once had a meeting in the village. In the time it took the people to turn up, we got three bars of chocolate, a bag of biscuits, a bottle of wine (long gone), some color pencils, and a winter coat (which I still wear). This kind of generosity led him to believe that spontaneous giving applied to everything.

His dream remained a dream until one day a man rode by our home with two horses, each one saddled up and ready to go. “Is someone bringing us a horse now?” he asked hopefully.

I had to say no. But I couldn’t have been more wrong.

Two weeks later, the sweeter of the two horses was ours, and my son was teaching himself to ride.

It seems that horses weren’t happy with their new home on the hill and decided to make a break for freedom. It came to pass that we were sitting around at home and saw them running toward us, pursued by a little chap on two feet.

In the spirit of the countryside — which dictates that if somebody has escaped animals you lend a hand — we got in the car and set off in pursuit. Despite their owners’ efforts, the horses were way ahead of him. We picked him up and went after them. When we finally ran out of road, the kids went after their equine quarry on foot -and corralled the horses.

So impressed was the owner by their determination that he offered to swap one of two for our rusty tractor. The gesture made my son’s dream into reality.

But keep reading because it only gets better. Three years later, a new dream began forming. My son decided he wanted to breed horses. We began researching how we might help him with his goal.

We soon learned that breeding horses was big business and that mating itself was expensive, whether you choose frozen semen or a live stallion. With our funds still wanting, we again filed it under “Dream ideas.”

But, out for a ride last week, my son saw some horses in a paddock. One was a stallion that clearly found our mare very attractive, so much so that he’d jump the fence and followed her home. We told the owner, and, with any luck, a foal will be on its way next June.

But even if the horse romance wasn’t consummated, I’m still pretty sure something will turn up. It always does. How? It’s a mystery. Italy can make dreams come true when you least expect it. As friend of mine put it: “Italy is giving you a big hug,” and it has nothing to do with universal gurus.