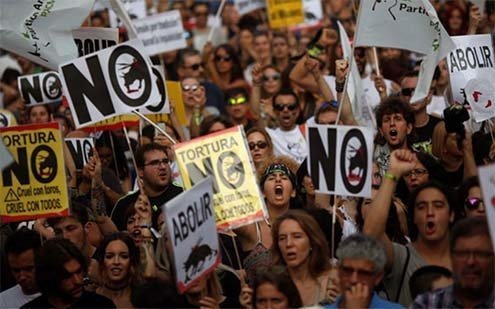 Anti-bullfighting protests have been common in Madrid in recent years.
I

n late October, the Spanish constitutional court ruled that a ban on bullfighting in Catalonia was unconstitutional, citing it as part of the “common cultural heritage” of Spain. The court said the practice could be regulated and its rules changed but not banned.

The Catalan Parliament had decided to ban bullfighting from the region in 2010 following a citizen petition signed by some 180,00 people. Among those who campaigned for the ban was Dirk Verdonk, Head of Programmes of the Dutch office of the international NGO World Animal Protection and author of a new book on animal rights. He was in Rome recently and we discussed the bullfighting issue. These are excerpts from our conversation.

The lifting of the Catalonia ban must represent a major disappointment. It certainly does — foremost with the animals in mind, and also given the efforts that have been invested. The animal protection movement in the region has worked with incredible tenacity. But feelings of frustration are not the priority. We need to find legal means to ensure that bullfighting does not come back to the region. We also need to address the issue at a national level.

As you know, Spain is going through a political crisis and will probably have a minority government or face a third round of national elections. Basically the question is: will the country fall back in its timeworn groove of old style conservatives alternating with socialists, or will the upheaval caused by the Podemos movement succeed in carving out a new political constellation and a new political climate. In the latter case, this would provide a window of opportunity to either prohibit bullfighting or to discourage it to such a degree that it will dwindle away fairly soon.

I’m glad you mentioned the national level, because I wondered what’s really at stake here, bullfighting or the political power struggle between the regions and the state, between the wish of many people of Catalonia to become independent or at least exercise a high degree of autonomy, and the efforts of Madrid to retain or regain control? The answer is obviously both. Yes, this is about the autonomy of Catalonia being curbed and about political forces way beyond the specific issue of bullfighting. But don’t make the mistake of some political commentators who say it is not “really” about bullfighting.

In the most concrete sense it is. Over the past five years this ban has prevented the torture of many animals. That is extremely important. We live in the EU, which in its founding treaty recognizes animals as sentient beings and demanding of welfare. To my mind it is outrageous that institutionalized cruelty such as bullfighting still exists as a “cultural’ exemption.”

At the same time, it’s no coincidence that bullfighting is in the midst of the struggle between Catalonia and Madrid. Though polls consistently show that a rather large majority of Spaniards turning away from bullfighting, even ashamed of it, there’s an influential and very vocal minority, well represented at high levels, that continues to see it as part of the Spanish identity. For them, the Catalan ban represents not just the end of a practice, but also the very rejection of being Spanish.

From that perspective, it seems that the reworking of identity is in order. Absolutely. And to make matters more complicated, it’s not just a national identity that is at stake here. Bullfighting and related events, like the running with the bulls in Pamplona, are highly gendered. They propagate a certain construction of “masculinity” — and as an aside, it may not come as a surprise that the San Fermin [running of the bulls] festival is marred by sexual violence against women.

Religion plays a part. Many religious festivals in Spain are linked to certain practices of torturing, defeating and killing animals, arguably to confirm man’s superior status within God’s creation vis-a-vis the animal kingdom. But complexity should not deter us from reworking those identities and redefining what is meant by “culture.” I like the slogan of the Spanish animal rights movement in that respect: “torture is not culture.”

You’ve just published a book on animal rights in The Netherlands. But the concept of “rights” seems to belong to the human sphere. Rights come with duties, and animals are not able to fulfill those duties. How could they have rights? That is a very apt question, invoking different responses. For one, from an empirical perspective one could argue that, at least in some countries, it is simply a matter of fact. In The Netherlands for example, the intrinsic value of animals is recognized within the law and forms the basis for legislation that grants a certain level of protection to animals. Animals are, to a limited degree, subjects of law. You could well argue that this constitutes rights for the animals. Surely, it is also possible to maintain that these are not “rights,” but just “entitlements.” Yet that’s already getting quite semantic. That animals cannot fulfill the corresponding duties is something very common within human rights too. No doubt children have rights, but they cannot be held accountable. Why could that not be the case for animals?

Digging a little deeper, the question is what is this thing that we call “a right.” Are rights God-given? Are they somehow intrinsic to Nature? If so, we will need to deduce from “the word of God” or “the Book of Nature” whether animals bear rights. In fact, you could make a pretty strong argument that they do for many religious traditions. In the Islamic tradition for example, animals have the right to have access to drinking water. Or are rights human constructions to regulate a just society? In the latter case there is nothing categorical that would prevent us from granting animals — or certain animals — rights.

The next question would be, Why should we? I think the answer lies in the fact that animals, like we human animals, can experience the world, can feel pain, can suffer — but can also enjoy being alive. Like us, they have an interest in not being harmed, an interest in flourishing.

They are, as philosopher Tom Regan put it, “subject-of-a-life.” So if we, as citizen, as society, are concerned with justice, we need to pay full regard to their interests. And if the right not to be tortured is grounded in the fact that torture causes pain, one cannot deny this right to an animal simply because it belongs to a different species.

What about killing animals for food? That’s a trickier issue. It depends. Personally, I think we should not mince words: to kill an animal is to harm it. You deny the creature to experience a continued life. You thwart any future-directed plans the animal may have had, even if that future was quite immediate. You go against the strong, primal impulse of the animal to live. But even if animals have a prima facie right to live, that does not mean it is always morally wrong to kill them for food: rights can collide and then it needs to be determined which right will override the other.

In case of people whose lives depend on meat, that may very well mean that their right to food trumps the animal’s right not to be killed. In case of our affluent Western society, with lots of nutritious and healthy alternatives to meat, the picture is rather different.

But the reality is that animals are produced for food on a massive scale, 70 billion per year. There are immense corporate interests and marketing power is overwhelming. Many people love meat and cannot imagine themselves doing without it. Becoming vegetarian or vegan at an individual level is one thing, but a society doing the same is quite another. In short, the production of animals for food is likely to be around for quite some time.

You were in Rome for the United Nations Committee on World Food Security. What decisions did the governments made regarding animals? They adopted policy recommendations on livestock production that called for improving animal welfare in all farming systems, but especially in industrial livestock operations. Seen alone, these recommendations are not very novel or ambitious, but nevertheless I think they are of profound significance. First, because animal welfare is a new concept for the United Nations; it made its first appearance in a UN negotiated text a mere two years ago. Second, the recommendations about improving animal welfare are firmly within the context of achieving food security and nutrition through sustainable agriculture.

In other words, the adoption of these recommendations represent the international community acknowledging for the first time that the goal of ending hunger should be achieved by sustainable agriculture of which improved animal welfare is integral part.

So Spain, as part of the UN, seeks to end global hunger while recognizing that animal welfare should be respected, and, at the same time, it allows animals to be tortured to death just for entertainment. Ironic. Spot on. In fact, our relationships with animals are rife with such ironies.