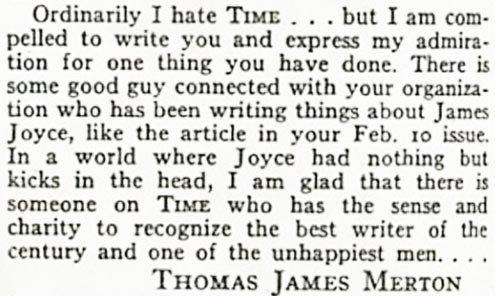 n March 1941, less than a year before Pearl Harbor forever altered the isolationist American landscape, aspiring Franciscan monk and St. Bonaventure literature professor Thomas Merton wrote a letter to Time Magazine, a highly unusual act since the conservative bastion stood for much that social justice-inclined Merton disparaged, including broadcasting the virtues of capitalism.

The French-born Merton had long struggled over whether to join the priesthood — he did finally, in 1949, becoming the Trappist monk Father Louis — in part because he retained strong ties to the secular world. Educated at Cambridge and Columbia, he began writing at a young age. His precocious 1948 autobiography “The Seven Story Mountain,” finished at age 31, became a surprise bestseller. In it, the highly idiosyncratic Merton pondered his visits to Rome, in particular the copious amounts of time he spent in the city’s smaller churches (“I started out … with the misconception common to Anglo-Saxons, that the real Rome is the Rome of the ugly ruins, the hills and the slums of the city.”)

Though Merton was “flirting” with the Franciscan Order at the time, he continued struggling with the idea of renouncing worldly ties. He loved reading and writing and grew fascinated by an Irish writer named James Joyce, whose masterwork “Ulysses,” first published in Paris in 1922, was banned for years in the United States for its “obscene” content (in the 1920s alone, the U.S. Postal Service burned hundreds of U.S.-bound copies). Merton’s literary weakness produced this note to Time, in praise of the magazine’s Feb. 10, 1941 piece about a Manhattan-based effort to aid his widow, daughter and son following Joyce’s death in Zurich, where he’d escaped from Nazi-occupied France. The Time report spoke of Joyce’s writing as “the most massive, inclusive, eloquent statement of Europe’s intellectual and moral chaos, a chaos now audible and visible…”

Merton, who later became a U.S. citizen, died under mysterious circumstances in 1968 at age 53, either of a heart attack or accidental electrocution. He remains profoundly associated with American Catholic thinking and mysticism, helping usher the U.S. Catholicism into an age of social responsibility and interfaith dialogue.

Ordinarily I hate TIME… but I am compelled to write to you and express my admiration for one good thing you have done. This is some good guy connected with your organization who has been writing things about James Joyce, like the article in your Feb. 10 issue. In a world where Joyce had nothing but kicks in the head, I am glad that there is someone on TIME who has the sense and charity to recognize the best writer of the century and one of the unhappiest men…”