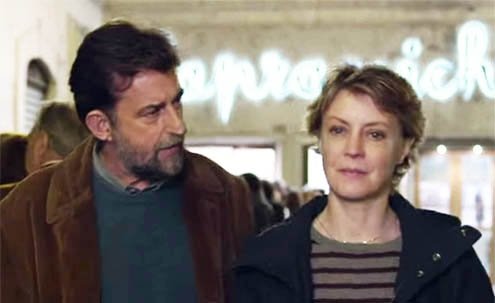 Nanni Moretti as Giovanni and Margherita Buy as Margherita in "Mia Madre."
S

he says, “Play the character, yet also stand beside the character.” This frequently repeated bit of advice comes from movie director, mother and ex-wife Margherita (Margherita Buy), the central character in Nanni Moretti’s latest film, “Mia Madre.” Arguably, it also summarizes Moretti’s long career as an actor who often plays himself as a man almost invariably beset by the inability to achieve a satisfying, authentic, and genial sense of self.

Curiously, though, that’s not the problem faced by this version of Moretti, who casts himself as Giovanni, Margherita’s brother. Smarmy, know-it-all Giovanni has his life together in ways his distracted sister does not. Instead, “Mia Madre” displaces Moretti’s traditional self-involvement onto Margherita, a talented and powerful woman struggling to relate to intimacy. She’s trying to make a socially conscious film about a factory strike and take-over while also dealing with a boyfriend breakup and caring for her (and Giovanni’s) terminally ill mother. In effect, it’s one side of Moretti (Giovanni) playing therapist to his other, non-therapeutic side (Margherita).

The therapeutic discourse evokes the Freudian films of the 1940s, which featured bearded men with medical degrees diagnosing women who had strayed from appropriate femininity. It’s no help that Moretti sometimes lapses into made-for-TV sentimentality, with the beatific “madre” Ada (Giulia Lazzarini) seen as teaching Latin to her granddaughter on her deathbed. When former students and friends come to pay their respects after her death, the cloying factor goes off the charts. Perhaps Moretti is too close to his mother’s death, in 2010.

Rescuing the movie from the maudlin is Margherita’s comically crisis-stricken film-within-the-film, which stars John Turturro as Barry Huggins, an overly confident, imperious, prevaricating yet charismatic and engaging American actor who can’t remember his Italian lines (he’s the American manager of a multinational company that wants to lay off workers.) While Barry’s stumbling and posturing put Margherita’s film project at risk, they also force her to reconsider her managerial style. And there’s no shortage of people to help her work through her ample existential problems.

Perhaps to reinforce the psychological drama — or to avoid permissions fees — the film has a claustrophobic quality. Though apparently shot in Rome, there’s not a single recognizable Rome structure, place, or street. The hospital, the setting for far too many scenes contrasting Giovanni and Margherita’s relationship to their mother, is the only place identified in the credits. And it’s not in Rome, but in nearby Velletri. For those interested in Rome according to Moretti, best to turn the clock back to his 1993 “Caro Diario,” which stars the ever-perplexed Moretti but puts Rome front and center.