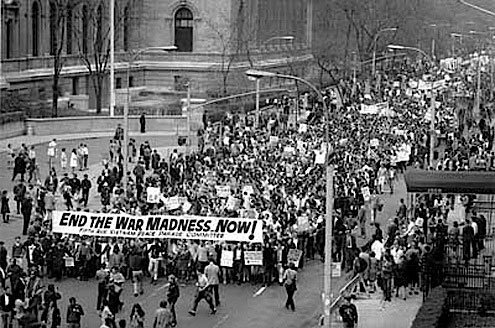 all it the new Domino Effect. First, a smart acquaintance tells me my latest column is “long on guilt-inducement and (undeclared) western self-hatred, and short on anything else.” Glorify ugly images long enough, I wrote, and both good guys and bad get cozy with the atrocious. The laconic permafrost settles in: Either we beat them or they beat us.

My acquaintance is disdainful.

“Is that really all the West, or democracy, is about? Just what standard are you holding us to? Is that the sum of who we are? (Surely you have read Pollack’s “The Adversary Culture”).”

No, I have not read Kenneth Pollack, the passionate advocate of pre-emptive war in Iraq.

I did read the late Lionel Trilling, the literary and social critic who in 1965 coined the phrase “adversary culture.” Trilling’s “adversaries” were Americans who denounced the behavior of their nation and its leaders —particularly when at war.

Conservative Harvard political scientist Paul Hollander personalized the notion after September 11. The new “adversaries,” he wrote in 2002, gain “identity and self-esteem” from berating “American (and Western) society,” which they find “uniquely repellant.” But their criticisms are “murky and shapeless” with “diffuse and contradictory grievances, impulses, unfathomable sentiments and personal resentments [that] are inherently difficult to express in precise and accessible language.”

But as I digest Hollander I get another note, this one recommending I read Eliot A. Cohen’s 5,500-word essay in Foreign Affairs called “History and the Hyperpower.” Cohen’s credentials, like those of Hollander and Trilling, are impeccable: Johns Hopkins, a book on war, and a gift for the alliterative (“The universal enmity that a hegemonic power breeds…)

Empires, writes Cohen, swinging America into line with colonial Greece, Rome and England, are intrinsically provocative. He writes of a “swirl of hostility to the colossus, to all it embodies, and, indeed, to the very fact of its existence.” To be an empire, “or something like an empire, is to be envied, resented, suspected, mistrusted, and, often enough, hated.”

If this canon is accurate, Anti-Americans fall into two camps:

Self-haters (that’s me) who oppose their country’s policies, and depress themselves, because they really can’t stand success, which according to Hollander awakens a sort of Marxist-fueled primordial malaise. It’s an immature response to the burdens of freedom based on too-high expectations of democracy and an overall disappointment with modernity.

Which makes me repeat my question of a week ago: Who is copying whom? Or, put a little differently, are we free of involvement in woes we blame wholly on others?

When a democratic superstate makes physical prowess, sexual arousal and litigious antagonism into cornerstones of culture, the response of the irrationally envious will be in proportion to the heft of those cornerstones – and they sprawl. When the mass media of the same democratic state runs roughshod over shame and privacy — with the toss-off: “Get over it.” — it forgets how its values (or lack of them) can command (or offend) the world.

That’s heartbreaking — as is an uncritical, statically patriotic America in which liberals are nationalists, dissent is self-hate, and an unapologetically messianic leader receives consensus largely as an antidote to peril. American college campuses, once a bellwether of political protest, host neutered students who must focus on getting the jobs necessary to repay loans.

This is not Marxism; it’s fact.

Writing in Rolling Stone magazine in 1977, the critic Jonathan Cott summarized the values of 1960s as “nongrasping, non-authoritarian, noninvasive”: if Cott was right we’re officially into the anti-60s.

Is this all America and the West, or democracy, are about? Nonsense.

Is that the whole sum of who we are? No.

But to the angry and the envious it may well be the confusing emblem of what we project, that crass is cool.

“No friend of America, domestic or foreign,” Hollander wrote in his 2002 essay The Politics of Envy, “can easily dispute that mass culture enshrines mindlessness, the cult of violence, a shallow sentimentality, and a pervasive entertainment orientation that has had discernible effect on the whole society including its political, educational, artistic, and religious institutions.”

So what standard am I holding us to?

Politically, it’s one of tone, which even Cohen recognizes, citing the Bush Administration’s drum-beat opposition to the Kyoto Protocol and the International Criminal Court. He rues America’s failure to adopt “imperial understatement” and maintain a “discreet silence” while working toward consensus. Legitimacy, he suggests, can hinge on “a bland smile, not boastful words.”

“Weaker states will inevitably view the strongest power as arrogant, inconsiderate, and demanding. There is no need to make it any worse than it must be.”

But we do make it worse, because we’re louder and surer than ever. The way we muscle to be heard defines who we seem to be, obscuring the democracy we wish others to share. As for shallow sentimentality, George W. Bush knows no better than to romance it as mission.

Perhaps no American president can any longer produce discretion and inclusion if he or she must represent a culture of immediacy that lionizes bombast so thoroughly that most public discussion is pitched toward anger, and restraint is mocked as weakness or a waste of time.

This way, we remain the giant injured animal of the post-September 11 with no moral compass but God’s will and a belief in history that is ours alone.

Is this guilt-inducement or self-hate, or both? Perhaps. But if so, the self-hate includes concern that a coming generation, gripped by the cursory fury of breaking news, will consider conflict — not mediation — as normative, with any visionary attempt at peace-making derided as appeasement.

And that is the sum of all melancholy.