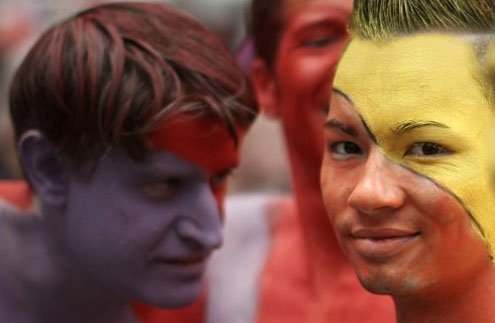 Germany had a period of LGBT tolerance in the late 1920s, before Nazism took hold. But later decades proved more difficult.
D

uring the late 1920s homosexual subcultures flourished in Berlin and Hamburg. But with Nazism on the rise the period was short-lived. Throughout the 20th-century, Germany’s LGBT community has faced an uphill struggle, as explained in, “Self-confidence and Persistence,” a short publication published by the Schweles (Gay) Museum of Berlin.

The Nazi regime exploited traditional prejudices within society, religion and the medical profession to foster contempt for anyone who didn’t toe the party line. In addition to Jews and other minorities, LGBT people were targeted, persecuted, imprisoned, tortured and murdered.

Even after World War II, both West and East Germany retained Nazi legislation that criminalized homosexuality. Finally, in 1968, East Germany annulled the law, with West Germany following a year later. Despite the official change, homosexual organizations and establishments continued to face harassment by police and hooligans on both sides of Berlin Wall. In West Berlin local bars rang bells as a kind of early warning system so patrons could stop embracing, kissing or dancing together when foes approached.

Today’s Germany is generally viewed as among the most gay friendly countries in the world. It has allowed registered same-sex partnership since 2001 but not same-sex marriage. As a result, LGBT people still endure “second class” rights. Eliminating discriminatory laws and passing new statues may be start, but it’s not enough.

Albert and I are walking in Lubeck, Germany on the Baltic Sea. It is past 9 p.m. and up ahead we see a restaurant and hear Latin-American music. Mexican. Why not? We’re hungry. We enter. It’s full but not crowded. We sit down. A few people are on the dance floor. Some are good at salsa but their Bachata is basic.

Alberto leans over to me, “What do you think?”

“I’m sure it wouldn’t be a problem,” I shrug. “Besides, if we order drinks and a meal first there’s not very much anyone could say.”

The bartender comes over — attractive, mid-30s, tough looking — and we order beer and burritos. A few minutes later he’s back with our beer. I take a large swig as I watch a blonde dancing by herself on the far side of the dance floor. She’s smiling and clearly enjoying herself. She bounces, does a kind of duck march, followed by a spasmodic arm wave. It doesn’t seem to concern her that any 12-year-old rocker-boy at his first high school dance could move with more rhythm and grace than she does. No one seems to take much notice.

“Come on,” Alberto says. “Let’s get up before our burritos come.”

“Okay, but I need another beer for courage.” I wave to the bartender and continue watching the blonde. Her every unusual dance move seems to convey the message, “I don’t care what anyone thinks; I’m dancing.” I envy her confidence.

Alberto follows me to a corner of the dance floor and we salsa. I’m nervous and I can tell Alberto is too but after years of weekly dance lessons at home, Alberto and I have no problem holding our own. A few of the other dancers look at us, and some of the people in their seats watch, but nobody seems unsettled. After two dances our meal comes and we return to our seats and eat.

The bartender comes to collect our plates. “Would you like anything else?” he asks and lightly touches Alberto’s arm. We order another round of beer.

Alberto turns to me and asks, “What do you think about our bartender?”

“Cute, but I don’t think that was a sexual signal.” I laugh. “I think it was just the secret homo solidarity signal, SHSS for short.”

From the street, two middle-aged women watch us through the window. One points and laughs and the other joins her. We continue to dance and they continue to gawk, making comments and laughing. I secretly hope they never dance again for the rest of their lives.

Being treated like an exhibit in a zoo is nothing new for most gay people. The biggest roadblock to our emancipation isn’t that, but the homophobia we harbor in our own minds. If we can be made to feel ashamed of who we are, who we love and what we do, we’ll sanction ourselves in ways that are far more severe than a couple of bigots peering through a window.

After the restaurant we go to the local gay pub. Nothing out of the ordinary: Lady Gaga tunes play, a couple of women sit at a table talking to a large drag Queen and a number of men who range in age. Clustered around the bar, they look like they all know each other. We sit down at a corner table and order a beer. Finally, the zoo viewing hours are over and we’ve found safe haven among our fellow “inmates.”