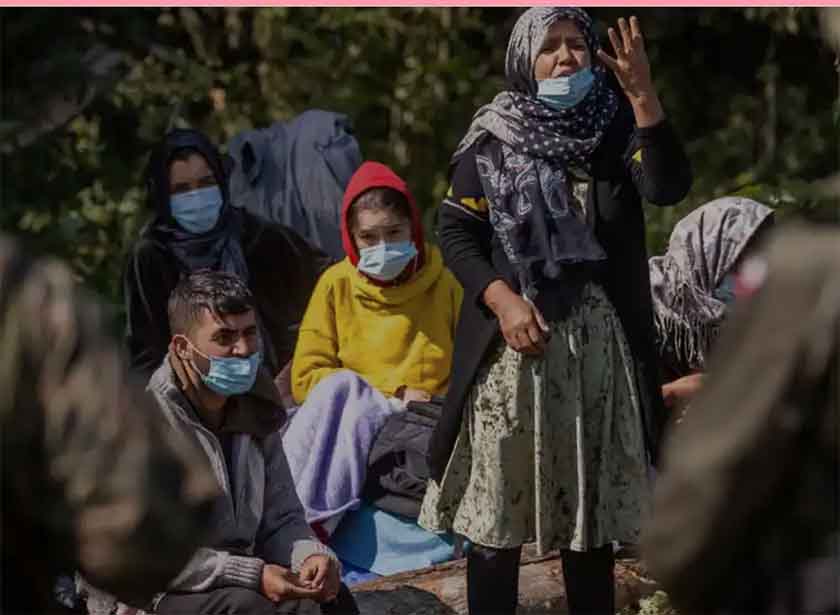 y friend Barbara is exceptional in so many ways I can hardly keep track of them. She and her husband Arek are both from a smallish city near Krakow, in Poland, and came here some twenty years ago, when he was hired by the math department at the local college. She was a nurse in Poland and brought those skills here. Her English is all but perfect and I find myself at her house often on weekends when we both make dough and, our kids buried in phones, gossip about this and that.

It’s no surprise she has strong and not entirely cheery views about Russia, never mind its leader. Poland has been Russia’s historical whipping boy, and the bad blood runs deeper than the residual animosity toward Germany, which hasn’t exactly treated Poland well over the scarred centuries. It was no surprise to me that last weekend, while sugaring a layer of apple cake, the subject of Ukraine came up front and center. Barbara was less interested in dwelling on the awfulness of Russian President Vladimir Putin than she was proud over Poland’s heroic efforts to take in literally millions of Ukrainian refugees. “I have seen nothing like this from my people ever,” she beamed. “They put aside all rules, everything, to help those in need.”

I cheered with her, and much of the world has applauded as well. Poland has made it possible for many displaced people to stay alive, get shelter, be fed. No effort has been spared to show Ukraine solidarity, and in this, Poland is much like the rest of Europe: all wear an “I am Ukrainian” t-shirt, not too different than those they wore after 9/11, when the going slogan was “I’m a New Yorker.”

It’s powerful and empowering to feel like you can actually help others in a pinch. The help is imperfect, of course, since no one knows exactly how to employ the Ukrainians, who are essentially reinventing themselves in a country that is not their own. For now, though, such sentiments aren’t the prevailing ones, not in the face of Mother Russia turned Monster Russia.

I came home from the afternoon feeling a little bit better about the world. But something, I didn’t know what, nagged at me, and I knew the nagging came from my still-strong ties to my Italian homeland.

Then, late in the evening, a coolish Sunday, it all hit me.

Syria’s civil war began in 2011 and still has not ended. Untold thousands have fled and many, many thousands have died. Many found ways of heading east and south on a kind of underground railway that, if you had the cash, could put you on a rickety boat bound from Libya to Italy. And over time, this became the tragic norm, with Italy under siege (if that’s the right word) by hurting Muslim refugees. Many died at sea. Others snuck in. Some were interned in camps. The overall Italian view toward these arrivals was hostile enough to give the far-right a rallying cry. Why should Italy let these dirty people in, especially as, even before COVID-19, it faced an economic crisis? The debate raged and the welcome toward those who made it was scant.

Italy then turned to the European Union, the same one now bashing Russia and applauding Poland: Help! It cried. The EU had many meetings but ultimately emerged with something like, “Let them eat cake.” This was Italy’s problem. More to the point, Syrians didn’t belong to the European club, neither ethnically nor religiously. This bit of cruelty by omission made lots of waves, but the waves did little for the refugees. Their situation was and remains abject.

There was no Poland in the wings ready to greet fellow Europeans and Christians with open arms.

But it did not end there. When the American president, anointed as the anti-Trump and as such a saint, decided it was time to exit Afghanistan last summer, he dwelled little on the refugee consequences. Just as with the Syrians, tens of thousands boarded another wing of the underground railway and headed West. Many were turned away. Many infants died. When large numbers of these refugees parked themselves on the Belarusian border with Poland, the Poles stationed troops to prevent their entry. A Polish winter can be unkind, and relief agencies couldn’t cope with the load. More squalor and more death ensued, but Poland did not budge. This was not its responsibility and it had no affinity of any kind with the destitute knocking on its door. This story went largely uncovered, except in Europe, but my local volunteer work brought me up to speed thanks to their international online newsletter. When I mentioned this to Barbara in passing, she gave it short shrift. “We are no emergency room,” she said. This was before Ukraine.

You could say that bending over backward to “be Ukrainian” is trending. All want in on this wave of compassion. It’s fashionable.

Now Poland is not only an emergency room but a hospital, and European politicians are tripping over each other to find opportunistic ways of showing their support for Ukraine and their hatred of Putin.I call it opportunistic because Poland isn’t the only European country in search of a new wave of cheap, unskilled laborers, and also not the only one to prefer that the new arrivals comes without Islamic baggage.

It’s compassion with a giant asterisk far removed from the bleeding heart.

Politicians drive trucks with supplies or fly to Kiev to applaud Ukraine’s resistance. France is also eager to help, with its young president (up for re-election in late spring) grandstanding left and right. You could say that bending over backward to “be Ukrainian” is trending. All want in on this fashionable wave of do-good altruism, a wave that isn’t likely to abate even after a peace deal. I was struck with this thought for an hour that night, before turning on CNN and watching more reports on Russian villainy offset by European heroism. Evil being squarely confronted with good, and please don’t spoil the party with a mention of the Muslim world, some of whose states have recently been torn apart by a less charitable form of fix-it empathy. To do so waters down the cheery story-line

It’s my fault; I chose to leave Italy make a life in Hollywood-landia, a place girded by illusions and at ease with hypocrisy.

Will I mention this to Barbara? No. I like and respect her too much. I enjoy her company. I put myself first, which is the way of the world.