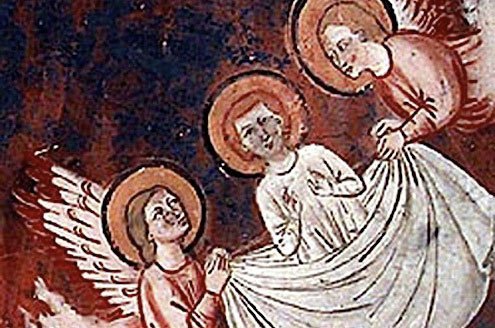 nyone who knows me — including the nuns at my old school if they are still alive — is likely to be surprised to hear that I took part in a procession the other day to mark the martyrdom of the patron saint of Spoleto. Never known for my religious zealotry, I still come out in a rash when I see all those habits at the Vatican, and have used up just about every excuse under the sun to get out of going to the happy-clappy monthly rosary evenings organized by the extremely zealous and terrifying nun who is headmistress of my daughter’s school.

So when I donned my embroidered cloak and grabbed my torch — sadly a battery-operated one, which rather spoiled the effect — last Saturday, quite a few people raised an eyebrow. Now cynics might say that I only agreed to parade through the streets of Spoleto because the procession was on horseback, and, being a mainly truthful, if not very religious person, I can only say there is some foundation to this claim. I’m not sure that I would have turned out in sub-zero temperatures dressed like a prat if there hadn’t been a horse involved.

Luckily for me, the saint in question, San Ponziano, had the good sense to be a horseman himself, so the matter was settled. Other less charitable people may suspect I was motivated by the free dinner offered by the Bishop of Spoleto. Well that is outright calumny, though the dinner was very good, as was the commemorative bottle of wine generously offered to every rider, complete with its own special label, depicting the long lamented San Ponziano on horseback.

But while the horse, the food and the wine certainly helped swing the balance, there was a part of me that thought it might be a good idea to help honor Spoleto’s patron saint, just in case.

You see, San Ponziano is revered by the locals or his powers in protecting the city from earthquakes. And believe me, Spoleto needs all the help it can get right now, as the earth has been trembling for well over a month.

As local people have been reminding themselves constantly of late, San Ponziano memorably said: “Spoleto will tremble, but will not fall.” Living with constant earth tremors is certainly an unnerving business. There have been a few big ones, though these are still tiddlers compared to the massive one in 1997, and for the first few nights we slept with blankets and coats by the door.

Every so often, the schools are closed to check for damage, and when one particularly strong quake shook the city three weeks ago, we all had to fetch our children from the evacuation point, where many of them (and some parents) were in floods of tears. For the rest of the time it’s more a case of constant shudders. The bed trembles in the middle of the night, the cups and plates rattle on the shelves. Often, there’s a dandruff-like patina of dust over my desk in the morning, and outside, the cranes which loom over the Spoleto skyline — ironically fixing the damage from the previous earthquake — swing eerily.

There are two schools of thought about all this activity. Either they are after-shocks, and show the earth is settling back down. Or, if you take the doomsday approach, they are the build-up to the Big One. The trouble is, everyone here is now an expert and churns out volumes of scary information, using all the seismic jargon. At a dinner party the other night, I learnt that the fault is nine kilometers deep and is located at Eggi, just two kilometers from where I live. Terrific. And that there are two kinds of tremors — the horizontal ones, which we’re feeling now, and the vertical ones. It’s when the two get together that you have to start worrying.

Even I find myself rushing to a website I have bookmarked, which helpfully charts all tremors anywhere in the world, more or less as they happen. It’s a bit like watching your plane take off on those in-flight screens and wondering if you’ll see it crash.

The only vaguely comforting thing is that we are not alone. Somewhere in the world, as my website shows, the earth is trembling every few minutes. Of course, countries like Turkey, Greece, Afghanistan and Japan feature constantly in the list of seismic black spots. But did you know that Poland, and even France also get the odd tremor? I didn’t, and for some reason, it makes me feel slightly better. Meanwhile, here is seismic Spoleto, I’m not taking any chances, and I’ve already signed up for next year’s procession for San Ponziano. I just hope he knew what he was talking about.