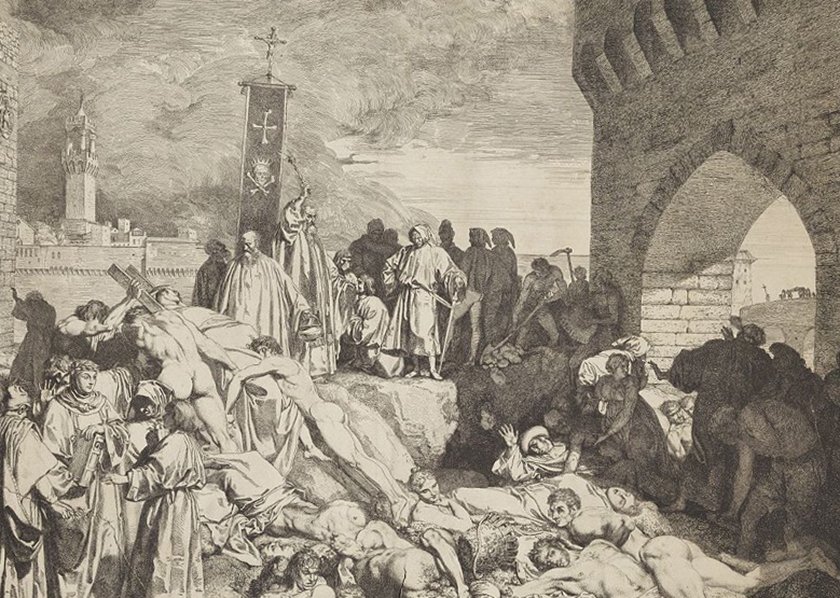 In Black Death-savaged Florence of the mid-14th century, streets were eventually cleared out and the sick banned from approaching them. The illness came after earthquakes and bank collapses had already caused social and financial havoc.
I

t all began when a group of 10 youths – seven women and three men – terrified by the contagion that was ravaging their beautiful Florence, decided to hide away in a villa outside the city for two weeks. To distract themselves from the awfulness of the times, the group decided to play a game: every evening each of them would tell a story, an amusing one. This they would do each day of the week except one, which they would dedicate to household tasks, and on holy days. They carried on with the plan, in all making it an astonishing 10 days of storytelling, for a total of 100 stories.

Despite the context in which the stories were produced, or precisely because of that context, their tales are a cornucopia of humor, ingenuity, and wittiness. The understandable need to entertain themselves with light-hearted stories soon developed into a meaningful structure, a celebration of human intelligence and fortune.

The group, composed of Elisa, Emilia, Fiammetta, Filomena, Lauretta, Neifile, Pampinea, Dioneo, Filostrato, and Panfilo, is not one of contemporary Florentines during the coronavirus lockdown. They are the product of the pen of early Renaissance writer Giovanni Boccaccio, who completed his masterpiece “Decameron” (from the Greek deka, 10, and hēmera, day) around 1353.

If for medieval scholars all things emanated from God, the anthropocentric vision of humanists celebrates humanity.

Set on the background of the bubonic plague or Black Death, which savaged Europe repeatedly in the Middle Ages, the Decameron’s interesting structure unfolds as a set of Chinese boxes, a series of stories nestled within a main story, a literary expedient often known as a “framing device.” The notion of characters telling stories within the main story is by no means original. Examples abound, including the Indian epic “Ramayana”, “Arabian Nights”, and “Chaucer’s Canterbury Tales” (which, incidentally, was deeply influenced by the Decameron).

But today I am specifically interested in the Decameron for obvious reasons: in fact, it has been on my mind constantly for weeks. I studied the Decameron both in high school and university, and always delighted in it. But not in a million years could I have imagined that one day I would experience social isolation as a consequence of a modern-day plague.

If someone ever needed a one-word definition of the cultural movement known as Humanism, the Decameron could be it. If the historical period known as the Renaissance, usually associated with a revolution in the aesthetics of visual arts, is acknowledged as the conjunction between the Middle Ages and the modern era, Humanism can be defined as the philosophical current behind the Renaissance. As its name suggests, Humanism puts human beings at the center of the universe, in sharp contrast with the prevalent theocentric ideology of the Middle Ages. If for medieval scholars all things emanated from God, the anthropocentric vision of humanists celebrates reason, rhetoric, history, Greco-Roman traditions, philosophy and grammar, giving great importance to the use of vernacular languages.

By setting his Decameron in the framework of a plague, Boccaccio aims to represent human ingenuity as a panacea after the devastation caused by the malady. Not all the stories are the product of the author’s imagination. Boccaccio added popular tales to his own and the book contains 100 stories in all.

Although their topic and nature vary, the common denominator of all his tales is wittiness, and the need to evade an asphyxiating reality through humor. This draws immediate if spontaneous comparison to the hilarious memes that have pervaded social media in recent weeks. In these confined times we are, more than ever, aware of the importance of cultivating humor.

The Decameron is an ode to human resourcefulness in the face of adversity.

But the Decameron is much more than a compilation of funny stories. It is an ode to human resourcefulness in the face of adversity. It is the prelude to an era – the Renaissance – in which human intellect became an inspirational and uplifting force.

It is never too late to read the classics, and those looking for a different kind of reading during these lockdown days may find themselves pleasantly surprised by this wondrous piece of world literature.

There is so much to be learned from the Decameron for someone with an interest in the history of Italy. The economic crisis that hit 14th -century Florence, and the social crisis that arose as a result are instructive, but perhaps the most captivating element is the striking similarities between Boccaccio’s world and our own. Human beings have always been driven by the same passions, which humanist scholars chose to encourage and even worship.

The most evident result of this approach is visible in the aesthetics of the Renaissance paintings that make Italy unique. But literature is another fine manifestation of this movement, and the Decameron is an elegy to the possibilities of mankind. A good read that requires a bit of spare time, something we seem to have a lot of these days.