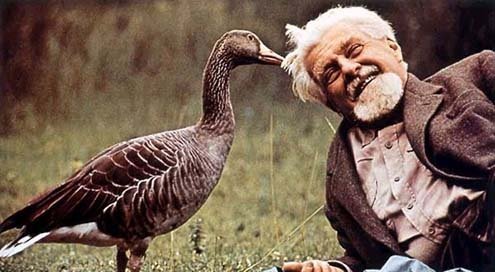 Konrad Lorenz and a friend at home near Vienna.
N

obel Prize-winning Austrian zoologist Konrad Lorenz was among the forerunners of ethology, the science of studying animal interactions in their natural environment. But he did considerably more than simply study the animals. He actually lived with dozens of species in close quarters. He also wrote lovely books about “his” animals, full of funny and interesting stories.

In one, he tells of being courted by a jackdaw that tried to stuff his mouth with worms, the jackdaw’s courtship gift. In another, he recalls having tea on his veranda with his elderly father surrounded by wild geese and their droppings. In one of my favorites, “Man Meets Dog,” he wrote about his own dogs. One of them would find a place under the table whenever dinner guests came to his home near Vienna. If one of the guests said something Lorenz found particularly odious, this dog would bite them. The words meant nothing to the dog, but it sensed the tense signals emanating from Lorenz himself. “The fidelity of a dog is a precious gift,” wrote Lorenz.

Sometimes I wish I had a dog like that. Mine would pick up phrases that bother me, two in particular.

The first is, “That kid [or student, child, patient] is only trying to manipulate you.” The second is, “All he wants is attention”.

Kids are born completely dependent. They can’t do much on their own to survive. At the same time, infants are highly competent in inducing caretakers to give them what they need. One way they do this is by crying. Humans are instinctively disturbed by a child’s cry. If they weren’t, the species would have died out long ago. Human infants get fed, warmed and held if they cry. But they are competent in other ways as well. It’s a hard and calcified heart that can pass a smiling infant and not pause to return the smile, and even play with the child for a moment. Infants engage with their eyes, smiling, cooing, and flapping their arms and legs in glee. Attention is what they need to grow. But it’s not just attention. More specifically, it’s attention in response to their signals.

Researchers conducted an experiment in which a mother and a baby were placed in separate rooms connected by closed circuit TV. The mother had a monitor with a live feed of her child, and the baby had the same showing its mother. The two played as if together. The mother smiled or peek-a-booed and the baby laughed and wagged his hands and feet, clearly getting what he needed.

We might think the baby’s reaction was to his mother’s playfulness. But the researchers then showed the baby recorded tape of the actions that had delighted him the first time around. This time the baby soon started crying. The mum was doing all the same things, but this time her actions were no longer in direct response to his signals.

Much of a child’s personality is shaped by early face-to-face interactions. That includes a considerable amount of brain development at the core of personality. Contrary to earlier thinking, how this early give-and-take evolves is fundamental.

Throughout their early development, children crave and need interaction with loving parents, just as they need soothing and calming. It’s like oxygen.

Asking for what you need in a way that ensures you get it hardly qualifies as manipulative. But older and more powerful grownups can indeed manipulate children — with demands, rewards and punishments.

A child throwing a tantrum may not need the toy or the ice cream he’s agitating to get. What he does need is help in being soothed and calmed by a strong and warm parent.

Plenty of times a thrashing child may not even know what he needs. He may raise a fuss without apparent reason. But when adults respond with, “Ignore him. All he wants is attention,” it’s tantamount to saying of a choking man, “All he wants is oxygen.” All?

We can sometimes forget that we’re the grownups. We have all the rights and all the power. Kids have fewer ways of making their needs known. Sometimes they need adult help in understanding just what it is they need and want, whether it’s the toy, or, far more importantly, attention.