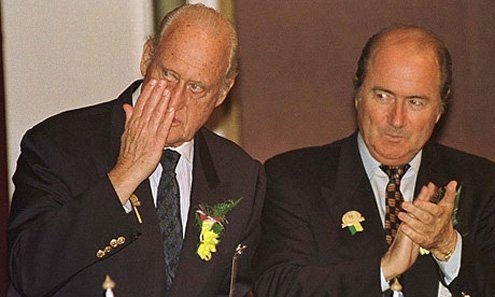 In 1999, a Dutch newspaper alleged that FIFA President João Havelange, who served from 1974 to 1998, accepted diamonds, porcelain and paintings in connection with Amsterdam's failed bid for the 1992 Summer Olympics. He is pictured here with current FIFA c
F

or much of the 20th-century, the governing bodies of the three largest Olympic movements packed its ranks with demitasse aristocrats, at first European but later including similarly venal character actors from the Middle East, Asia and Africa. The International Olympic Committee (IOC), FIFA and the then-International Amateur Athletic Association (IAAF) were structured as Masonic monarchies and anchored in cities where privacy mattered, Lausanne, Zurich and Monte Carlo, respectively.

These organizations were lorded over by tyrannical patriarchs who, to paraphrase a French expression, dictated the weather. Some endured for decades, rewriting to constitutions to ensure their permanence. Loyalists were bought and maintained in kept-women fashion. The buying of loyalty became even more pronounced after the fall of the Berlin Wall, when organizations extended their reach east and south, into states where slick fraud was the norm.

These three club-like groups were alone responsible for situating the Olympics, the World Cup and the World Athletics Championships, events held every four years and deeply coveted for financial and nationalistic reasons. The geographically delicate assigning process suited an old school mental chess that invited both persistence and flattery. Some of the men who populated selection committees came from social realities in which the bribe was not unusual, nor was relying on friends to bend local rules.

Wealth-making advances in marketing made the global sports game and its site-picking process all the lucrative. Committees studied bids carefully but tended toward those with the most available capital. The logic was two-fold. The selectors had more to gain, yes, but more money would be I the event a venue wasn’t finished — a real concern if the event was being held in a country where timetables meant little. It was a grand game managed by people who, while believing in if not loving sports, also took self-aggrandizement for granted.

For decades, the big three existed above the law, with high-priced international attorneys present to minimize paper trails. Few people outside sports paid these inner workings much mind. It was a murky Raymond Chandler dimension, but global (“How long do you think the big-time mobsters would last if the lawyers didn’t show them how to operate?”) The Swiss and Monaco walls helped. So did an effective culture of silence. One blown whistle could end a lucrative career. Corruption, as aspect of diplomacy, was a means to an end, and the end was spectacle, entertainment, games. Soccer, track and the Olympics were managed from nations with discreet banks.

FIFA is now under assault not only because the American FBI is honing in, but also because Switzerland itself, in recently opening its banking doors to American tax investigators (a post 9/11 development), has withered the membranes that once guarded its amoral financial system. FIFA is now being exposed as an organization with members who trafficked in bad money and struck shady if not illegal deals.

But Puritanical finger pointing fails to get at the “why” of the systematic abuse, some of which concerns doing big business on an international scale, and in cultural environments in which payoffs are an expectation. Some would-be democracies resist those who seek results without reaching for their pocketbooks. FIFA and the IOC have played the payoff game for decades, sometimes for shameless self-interest, others to ensure a better outcome. Try staging a World Cup in Brazil, or South Africa, or Russia, or the (mother lode) Gulf States.

That said, FIFA is getting what it deserves. Maintaining an early 20th-century structure in 21st-century built on chatter and transparency — or at least the idea of transparency — is presumptuous, and the re-elected Blatter in line to play Louis XI before a tide of headhunting Anglo-Saxon Jacobins.

But make no mistake about one thing: the grease-the-wheels culture employed by the venal big three was intended foremost to assure things got done, at the same time rewarding the greedy for making it happen. The world is not a democracy. And not even a self-righteous FBI can make it be so. Enter a witch’s den and you’ll find the ladies themselves, now and forever.