See No Evil, Drink No Evil 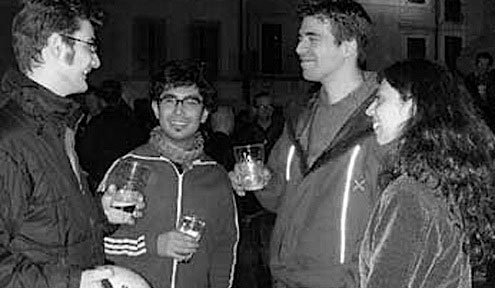 Youths gather in central Rome for a late-night beer. Most will return home on their mopeds.
O

n Aug. 21, 2002, a drunk driver killed Roberto Pedretti. The 32-year-old mechanic was headed home after a day in the mountains when a speeding BMW veered across the median strip and struck his motorbike by Lago d’Iseo, near Brescia.

“He didn’t even see him,” says Pina Pedretti, Roberto Pedretti’s mother. “He [the driver] even carried on for 80 meters until he hit a wall.”

Though the BMW driver, 39, had alcohol levels five times over the legal limit, he received only a three-month suspension of his license.

The verdict, acceptable under Italian law, embittered Giuseppe Pedretti, Roberto’s father, who has since become an activist against drunk driving. “My son was killed twice, the first time on the road and the second in court,” says the elder Pedretti. “I don’t want to see people going to prison for years, but I still have a daughter using the roads.”

Drunk driving, though not a commonly publicized theme in this auto-mad nation, is a growing hazard in Italy. Weekend television reports often show images of wrecked cars once filled with teenagers headed home from a night out. Last month, also near Brescia, four youths died when their auto careened into the Oglio River.

Italy has come to file these driving deaths as “Strage di Sabato Sera,” the “Saturday Night Massacre” — since most occur after parties or stints at nightclubs and discos.

The chances of surviving an accident on a Friday or Saturday night is half that of any other time of the week, according to government statistics. Between 6,000 and 7,000 people die annually on Italy’s roads. And while there is no authoritative tally on how many are related to drinking, officials suggest the figure might be higher than 700, with an estimated 25,000 injured.

The Italian state statistics institute, ISTAT, says there were just 55 alcohol-related driving fatalities in 2001 and 73 in 2002 — by all accounts incomplete tallies. In fact, statistics on the subject are scarce, in part because drinking and driving appears to be still socially acceptable behavior in Italy.

Christian Democratic (UDC) politician Carlo Giovanardi, the nation’s minister for parliamentary relations, has introduced new legislation that would require bars and clubs to stop selling alcohol from 3 a.m. to 6 a.m., and to close at 4 a.m.

But the bill is struggling in Parliament, to the delight of bar and club owners. SILB, an organization of nightclubs, says such legislation would damage the industry and provoke layoffs.

Giovanardi is discouraged by the uproar. His bill would cost the government nothing, while increasing police surveillance would. “I challenge anyone to tell me it is scandalous that bars and clubs [close] at 4 a.m. [Ending the sale of alcohol] from 3 a.m. onwards allows a much smoother exit from the din and stupor of the bar or club to the reality of the road,” he says. “It also stops the nomadismo, the driving to another place that is still open.”

Police officials seem to agree, but cite lack of resources. “We have a real Saturday-night slaughter,” says Piero Caramelli of Italy’s Polizia Stradale, but he adds that it should be up to citizens to discipline themselves. “We can’t put a policeman or a carabiniere at every driver’s shoulder. It would become a military state.”

The dilemma, however, is that self-policing works sporadically, if at all.

After his son’s death, Giuseppe Pedretti joined the Italian Association for Road Victims and Their Families. Though he thinks the Giovanardi law would help, he insists police don’t take the problem seriously enough.

“[The authorities] have introduced the points system, but on the roads there isn’t any surveillance, there are no police,” he says. “It is pointless to introduce a law and say that we have to go 50 kilometers an hour when there are no patrols.”

Antonio Lerario, vice president of the road victims association, agrees. “Police checks … [are] still very much lacking: lacking in the summer, in the winter, lacking around the clubs… They don’t even have the technical tools to see if a young person is drunk or not.”

Lerario says little will change until there’s more dialogue and the awareness it brings. He suggests mandatory courses in road safety.

Caramelli of the Polizia Stradale says his officers also visit schools “with the aim of preventing” drunk driving and inviting students to adopt a “designated driver” rule when they go out drinking.

Pedretti, who is retired, also travels to schools throughout Italy giving talks on road safety and the hazards of drunk driving. He often cites the UK as a good example of a nation that took heed of a problem and responded. Though its road death rate has risen lately, Britain still has one of the lowest road accident death rate in the world, about 3,000 dead annually — about half what it was in 1979. That year, 51 percent of drivers surveyed in a poll admitted to have driven while drunk at least once in the previous week. The number of people who died in alcohol-related crashes was 1,640. By 1999, however, the figure was down to 460.

The improvement is linked to several facts.

Britain intensified its scrutiny of drivers suspected of being drunk. Breath-test checking appeared to work: The number of drivers who tested positive was 42 percent in 1979, but only 16 percent in 2001. In 2001, 624,000 drivers were breath-tested in the UK, with 85,000 found to be over-the-limit and convicted. In Italy the 2001 conviction figure was 28,068.

Penalties are also harsher in Britain. In Italy, a drunk driving conviction means losing 10 points (of a maxium 30) on a license and the possible revocation of driving privileges from 15 days to three months — the law applied to the BMW driver. In the UK, a drunk driver faces loss of license for year and possibly six months in jail. The penalty rises to a 10-year prison term if an accident results in the death of others.

Children in the UK also grow up around tough television campaigns, many of which graphically show images of crashes. Driving drunk is made socially unacceptable; the United States behaves similarly.

In Italy, some organizations have taken matters into their own hands to quantify the problem. Over nine months in 2003, a motor organization in the Trentino stopped 1,744 people driving at night, and breath-tested them with their consent. They discovered that 53 percent of the mostly young drivers were over the limit.

This informal survey occurred in a largely rural area, but the problem is clearly more general.

On any given night in central Rome, it’s common to see youths with a scooter helmet in one hand and a beer in the other.

“I usually drink one or two when I’m driving” admits 28-year-old Domenico, who was interviewed in Rome. Another member of the group, 24-year-old Daniela, saw nothing wrong with a beer before driving. “After that [one beer] it depends on how well you hold it or don’t hold it. I personally can’t drink much, but my friend drinks four or five glasses, and she is fine, so it depends on the person and his personal limits.”

Francesco, 28, who joined the group, agreed. “I’ll drink four or five Guinness [beers] and drive … well enough to get home on roads that I know,” he says. “You can drink as much as seems right to you and get home safe and sound. The important thing is that if you drive and you’ve drunk four beers, you concentrate more than usual.”