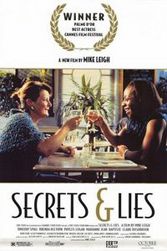 Mike Leigh’s portrait of blue collar hush-hush is his most poignant film. Londoner Hortense Cumberbatch (Marianne Jean-Baptiste), an adopted black woman, coolly tracks down birth mother Cynthia (Brendan Blythe), who is white. Be careful what you wish for. Cynthia is racked by repression and hysterical self-doubt provoked in part by her estrangement from brother Maurice (Timothy Spell), a wedding photographer. Hortense’s appearance in Cynthia’s life is Leigh’s cue to probe the deceit that families perpetrate in the name of survival. Though Hortense is a catalyst for reconciliation, the scarring runs deep. The film itself seems to weep at times. Jean-Baptiste, Blythe, and Spell, freed from hackneyed restraint, are each majestic. This is a remarkable accomplishment from the British John Cassavetes.