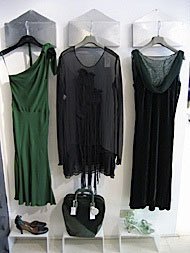 n Saturday I woke up early at 9 a.m. with a hankering for chocolate chip pancakes and a new pair of designer boots to wear out that night. My Italian boyfriend, ormai, gets that same Saturday pancake yearning. He wanted a new sport jacket for Saturday night out.

We agreed that second-hand designer stores were the way to go. We wanted to be back by 2 to buy puntarelle salad at Rome’s Monte Verde market for lunch. He whipped up the pancakes from scratch (no Bisquick to be found in our cupboard, alas!) and by 10 we were ready.

I grasped his palm-pilot GPS with a death grip in my right hand, holding it in front of Germano as if it were the scooter’s rear-view mirror. I was terrified I would drop the thing. Tutt’altro che puntarelle a pranzo! We weaved through the Lungotevere’s traffic and to the right up the hill, arriving at the “Dress Agency” store at Piazza Euclide in Parioli.

I liked the simple architecture of the store. White, relaxing, wide spaces, a few steps. You could breathe. And no musty used-clothing smells.

“You should have fixed your hair today.”

The other clients at “Dress Agency” were hushed and well-groomed. The women, aged 30-50, had coiffed hair and the men wore pressed sport jackets. Germano was already eager to leave. His sport jacket was beckoning and the magic of the GPS started to wear off once in the store.

The clothes were pleasingly grouped both by type and color: white shirts, white sweaters, blue shirts, blue sweaters, black jackets, brown jackets, and so on. If the items were sorted in Excel, column A would have been “type” and B “color.”

The young shop girls, busy with the jewelery and bags display, nodded pleasantly and non-invasively. I tried on a black and white Fendi mini-skirt and Prada dress. Focus! We were looking for boots. The waterproof cherry-covered boots for €10 called my name but I held off. The sales clerk said they were a real chicca, but I think I’d have to live on a farm to get full mileage out of them.

Then we were off. The GPS led us up the hill to “L’Oca Giuliva” on nearby Via Fauro. The shop sells second-hand designer items from actors only. I don’t get it — aren’t actors rich? Unless volunteers trudge over to Michelle Hunziker’s home to collect the fabulous dresses she wears on Striscia la Notizia once she gets tired of them.

The store was slightly larger than a shoebox. Items were packed tightly together on both bottom and top racks, requiring real muscle power to slide the clothes apart. The crazy colors, styles and larger sizes didn’t seem very high-end. I dallied over a pair of fist-sized fuchsia clip-on rhinestone dice earrings, until I saw Germano’s face saying “play on your own time.” No boots here.

We drove back over the Tiber, the GPS egging us on through Borgo Pio in Prati to the store “Marcolino” on Via Plauto. Germano and other handsome 20-40 somethings explored the sweaters, coats and blazers. The sales clerk kindly offered me an entire pack of tissues for my continued sneezing.

The store had an impressive collection of Burberry trench coats both for men and women. In five minutes, Germano had found both a classy black corduroy jacket and an elegant blue suede jacket. At €40 each, even with the extra few euro needed to dry-clean the dust out of them, it was a bargain.

Twelve-thirty and Germano’s mission was accomplished. The GPS was losing its allure but (please!) only one more store to go.

Barbara, the jewellery-wearing owner of the “Babazaar” store near Via Nazionale had relaxing yoga music playing. I mulled over a pair of pink Gucci high-heeled snakeskin boots. Germano waited outside gazing vaguely at the window display.

A beautiful couple strolled in, the middle-aged man dressed in a plaid sport jacket, the younger woman in dark form-fitting jeans, brown-heeled boots, and blue velvet jacket. Her jacket was a little like Germano’s but cinched at the waist. They talked in low tones and she picked out a gold and black top. The man chose another item for her.

“Certainly. Here, try on these as well.” Barbara had picked up on the woman’s preferences. The man handed over €250 cash. They couple left with his hand on her shoulder, which was hoisting a tiny Louis Vuitton shopping bag.

And then, hiding in the back corner, I spotted them: a stunning black pair of never-been-worn Tod’s. I counted out €80 into Barbara’s silver-braceleted hand and took hold of my new boots in a Chanel bag. Mission accomplished.

Germano and I made it just in time to pick up the puntarelle. That evening, we flaunted our purchases in front of the hall mirror. Then we sashayed in our new duds across the street, where we picked up a movie. After a day of shopping, we were too tired for anything else.