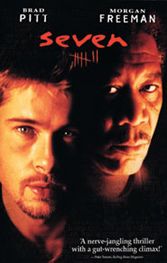 David Fincher’s serial killer flick gets flack from detractors as too fraught (read overwrought) with atmosphere that gnaws from plot. OK. Point taken. But you can no more take rain out of this than yank the dank from “Blade Runner.” A noir is intended to frolic in relentless melancholy. Brad Pitt (Mills) and Morgan Freeman (Somerset) make a charismatic cop team and Kevin Spacey’s arrival is fine desert. This is a serial killer flick that cleaves its way to a monstrous kicker. Fincher twirls on the knife-edge between parody and nihilism (“Fight Club,” “The Game,” “Panic Room”). Who does it better?