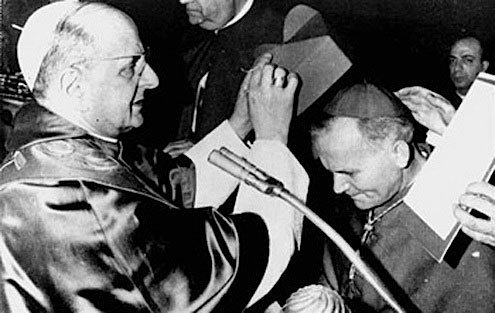 his is what happened when the pope died in 1978. First came the phone call, on a very hot Sunday afternoon in early August. From Jack Payton, the United Press International Rome bureau chief.

“Get to Castel Gandolfo now,” said Payton. “The pope’s in bad shape.”

Payton was not in any mood to negotiate the details of my passage.

Pope Paul VI, perennially weak, was vacationing at the Castel Gandolfo papal palace in the Alban Hills when his heart rebelled. It was Aug. 6, 1978. A month earlier, I’d covered a Mass in which he’d spoken of his closeness to death and the next world. Small-boned and fragile — the antithesis of the Pole who would later succeed him — Paul at 80 was vacant, his gaze severed from the temporal.

Castel Gandolfo is somnambulist’s paradise in August. When I arrived the main square was empty. Incredibly, no one I spoke to— including the local barista —knew the pope was dying. In an age before mobile telephones, the bar had the town’s only central public phone. To make calls to Rome, you needed handfuls of gettone, phone coins that cost 50 lira each.

I called the UPI desk, fumbling with the corrugated coins.

I hung up and walked to the papal palace 50 meters away. Only absolute stillness. Two journalists from the news agency ANSA had arrived. Paolo Frajese of RAI Uno joined them soon after. They laughed fraternally and shared summer stories.

Get quotes, he said; from the townsfolk, from religious, from anyone; get quotes and information.

But few had information, let alone reaction. When I told the bar owner the pope had died he said only “Povero…”

There was a simple (if un-melodramatic) explanation for the sedate response: the most self-effacing pope in recent memory had died on perhaps the most Godforsaken day of the most Godforsaken month of the Italian year. It was holiday-time in another Italy and the aloofness was evident at Castel Gandolfo.

But it was not manifest in the hyperbolic engine that was the New York City desk of UPI. There, mining memories of the hair-rending that followed the 1958 death of Pius XII, also at Castel Gandolfo, editors — despite Payton’s best moderating efforts — intervened to re-write and color the scene.

My indolent Sunday dispatches were infused with sobbing nuns and grieving townsfolk gathered in droves before the papal palace (I saw only a few curious German tourists). The mourning constructed in New York and inserted into my stories was urgent and passionate. From the sound of it, all Castel Gandolfo wailed for the loss of the “Pilgrim Pope,” as he was called (he had traveled a bit, the first pontiff to do so).

The truth was no wailing at all. No geyers of emotion. The only notable sound came from the Vatican correspondent of Il Tempo newspaper, who launched invective at me when I refused to relinquish the precious pay telephone at the bar. The spat annoyed the bar owner who snarled at both of us. Frajese, sipping a coffee, calmed the waters and extracted me from harm’s way.

On that day, Frajese, who befriended and counseled me, ran the table with grace (he died in Paris five years ago after a long and distinguished RAI career). He broadcast nonstop, extemporaneously and loquaciously. Later came Peter Jennings of ABC News, who brought his own, New York brand of diversion. He cursed the subversive breeze, which ruffled his inky, padded hair. Producers attended to and assuaged these vanities.

In all, looking back, many of us were amateurs trying to do a professional job with a big story. We didn’t have all the bases covered. We relied on verve and ingenuity over planning. We perspired and it showed.

The vaudeville mourning New York slapped into my stories gradually yielded to more accurate reports: the pope was dead but few were traumatized. The church still functioned. Italians remained on vacation. The drama-machine that dogged Paul’s death proved ultimately pointless because the truly compelling would follow over the next 90 days, with the elevation and death of John Paul I, Patriarch of Venice, and the election of Krakow’s charismatic Karol Wojtyla.

I feel for my colleagues who now attend to the vicissitudes of Pope John Paul II, the tough old Pole whose endurance confounds the endgame’s scriptwriters. Some on the papal deathwatch are veterans, others novices, but they’re all bound to the insolent requisites of contemporary breaking news, which is the institutionalized version of Beatles-era keening. News is like a child trying at all costs to win the attention of a parent. The “look at me!” complex is intense and suffocating.

And since a papal death is the church’s rare Oscar ceremony, journalists on short notice must manufacture pretend-familiarity with the actors.

When I returned to Rome after three days and nights at Castel Gandolfo, two additional staffers had reinforced the UPI bureau. We were now six. My favorite was a Briton named Barry James, who later wrote wonderfully for the International Herald Tribune. James displayed two qualities that matter little now: patience and reflection. Charged with writing analytical pieces on the future of the papacy — one, even two, daily — he would, a few hours before deadline, announce softly that he was taking a walk, “to think about things.”

And walk he did, for an hour, even two.

He returned, positioned himself behind one of our old Olivetti’s, and wrote masterfully. “I think I’ve got it right,” he’d say after, smiling.

Now, the news is much about rush and uproar, with the fastest and loudest winning. Which leaves insight out of breath, or cowering. My papal turn fortunately came, and went, an era ago.