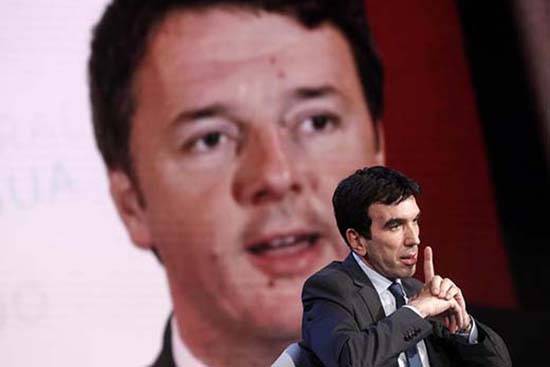 Democratic Party leader Maurizio Martina can'r avoid the shadow cast by Matteo Renzi, who resigned in March after an election debacle.
I

n the winter of 2014, newly elected Democratic Party leader Matteo Renzi staged the equivalent of a palace coup. Young, ambitious and impatient to lead, Renzi engineered the ouster of Prime Minister Enrico Letta, a respected member of his own party. The move was considered bold by some, ruthlessly shortsighted by others. Former Florence Mayor Renzi got what he wanted, the prime minister’s office, but his halcyon days atop the fractured left wouldn’t last. The verbal brawling he’d helped to incite led to a party crisis that made his dynamism look contrived, if not venal. The party argued publicly over its own banquet table, spreading its saucy mess. Renzi then lost a referendum he was sure he’d win, on election reform. Four winters after undoing Letta the 43-year-old wonder-boy was himself undone.

But not entirely: The actual swan dive came a few months later, when his party won only 18 percent of the vote in March 2018 election, a humiliation deeper than any poll had predicted. While still defiant, if not smug, Renzi stepped aside. Yet in Italian politics, all quitting is half-quitting, leaving room for reincarnation (look up Giulio Andreotti, and yes, a man named Berlusconi).

This preamble leads us to May 2018, which finds the election “winners,” the Five Star Movement — a tangled web of alt-right cum libertarian new agers who style themselves as post-ideologues — desperately in need of backup, since their 32. 2 percent share of the vote, while making them the largest single political force in Italy, gets them nowhere alone. First they said they’d never marry, let alone flirt — out with political incest. Now, forced to kowtow to Italian reality, they’re in search of coalition allies. When talks with the traditional right, which racked up 37.5 percent in March (led by the Northern League’s nearly 18 percent) ended in acrimony, the suddenly pliant and partner-hungry Star-folk looked to the only other place it had left, to the broken left itself, Renzi’s broken left, a left ostensibly no longer under the full control of Mr. Maverick. This, for an instant, seemed to leave an opening. Until Renzi tried slamming it shut it by saying nasty things about his starry rivals, and adding, reasonably enough, that election losers have place in government.

Yet by definition a coalition includes losers. Over Italy’s chaotic political decades, just about everyone has landed up in bed with an enemy at one time or another. It was and remains a parliamentary necessity. Christian Democrats once tried making peace with Communists (or Aldo Moro did, and was murdered as a result); Christian Democrats flirted with Socialists; t 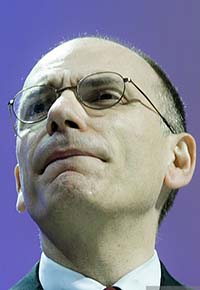 amed neo-Fascists (Gianfranco Fini) banded together with blunderbuss populists (Berlusconi). Call it Bacchic politics. Wine is shared, even if grudgingly.

But humbled Argonaut Renzi wishes to stand above all that. No pacts with extremists, he says. No confidence for Five Star adversaries who during the campaign labeled him arrogant and self-interested, a leader who failed because his progressive political priorities — scrap this, overhaul that — were second only to his bullish ego, the same ego that drove the original sin – Letta’s ouster, and his worst miscalculation: that “modern” Italians would rise above their suspicions of executive power approve sweeping election reform.

No Italian group knows better how to press the self-destruct button than the left, endlessly mercurial at its own peril. The U.S. Democratic Party often suffers from the same defect, making candidates and positions hard to rally around. Though Donald Trump & Co. now looks in disarray, there’s little Democratic compactness to offset his kill-the-politicians politics.

Renzi’s TV remarks set off a predictable furor, with some in his party again damning his one-man-show vanity. Acting PD leader Maurizio Martina, actually spoke of a left whose divisions were now deep enough to destroy it. He might be right.

If the PD’s negotiations with the Five Star Movement go nowhere, assuming they even start, Italy’s next elections may see a PD struggling to get 15 percent. What the PD loses, Five Star (which lives off public exasperation), the Northern League, and Berlusconi’s struggling Forza Italia will gobble up.

In 2013, Renzi could do no wrong. He was a poster child for Italy’s political youth movement. He’d take over and triumphantly replace old with new. He’d play early-days Barack Obama to cheering crowds. But sins forgotten by voters are never deleted from political backrooms, which exist in part to manufacture the drama a nation depends on for the bittersweet sitcom known as democracy. Renzi-haters never forgot or forgave his Sherman’s March. Now, all is in flames, Nero’s fiddle ready to play a May Day tune, for no other reason than to make Renzi stop smiling.