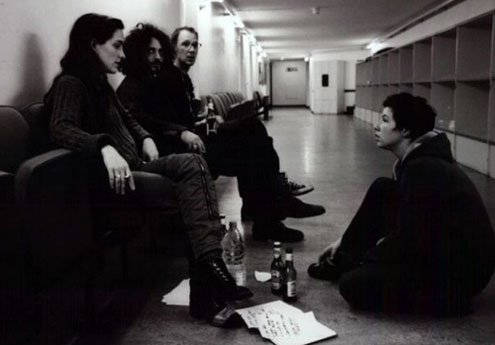 Godspeed You! Black Emperor: There are no cobwebs being dusted off for these recordings.
T

he car’s on fire and there’s no driver at the wheel, and the sewers are all muddy with a thousand lonely suicides, and a dark wind blows…

For more than a handful of people, this spoken intro from 1997’s F_ A_ ∞ (aloud, that’s “F-sharp, A-sharp, infinity”) served as the introduction to Canadian post-rock pioneers Godspeed You! Black Emperor. The Montreal group’s first widely available album served as a new mile-marker for instrumental rock. Bands had successfully worked the basic formula before — quiet build-ups giving way to tempestuous rock crescendos were mastered by Slint and refined by Mogwai — but no one did it with the same panache as Godspeed.

Panache is perhaps too spritely a word. Godspeed was morbidly fascinating. At a time when the Internet promised so much in a post-communist Clintonian democracy and the best rock music could do was feign anger and boredom at itself in ever-devolving waves of grunge as Y2K approached, it was hard to hear a group of black-clad Canadians offering political conspiracy theories as reality checks without laughing.

But that was the gamble — they wore a straight face and (mistakenly but convincingly) peddled record label relationships with arms manufacturers. You either bought into their cynically self-serious worldview or you didn’t. Middle ground was hard to come by.

Though hope always existed as an undercurrent in their music, 2002’s Yanqui U.X.O. was Godspeed finally giving into the temptation of outright anger and frustration. The announcement a year later that they’d be going on indefinite hiatus made sense in retrospect: By then, we’d had 9/11, the War on Terror, the ICC, the first dot-com bubble-burst, and the SARS threat (for starters). The exit appeared prophetic — a band that had acted as post-rock’s wild-eyed soothsayers could retreat with smug satisfaction and let the endtimes they’d foretold descend. We cackled in the good times; they in the bad.

Inevitably, we got what was coming. Elections and international tension, economic instability, high unemployment, the harsh realities of everyday life — you know the story. So do they. Maybe that’s why they started touring again in 2010. And maybe that’s why we have our first new Godspeed You! Black Emperor album in a decade with ‘Allelujah! Don’t Bend! Ascend! (Constellation).

At face value, this album seems like a capitalist cash-in, a hollow gesture sabotaging the band’s hard-earned antiestablishment legacy: 40 of the album’s 55 minutes comprise two songs that aren’t even close to being new. Opener “Mladic” and “We Drift Like Worried Fire” have floated around in bootleg form as “Albanian” and “Gamelan” for over a decade and regularly make the cut for setlists. The other two tracks are ambient breathers. This album was even available on recent tour stops. They didn’t need to do it.

Yet, ‘Allelujah! convinces precisely because of that flaw, because it is vintage Godspeed. The easy pitch is a new beginning, but I don’t see it that way — it’s a long-delayed coda to the band’s long-festering anger. Yanqui U.X.O. was sheer rage as a parting shot; ‘Allelujah! is sheer release. To that end, the first words you hear on “Mladic” say it all: “With his arms outstretched.”

The music sounds as aggressive and fluid on the two centerpieces as it ever did. “Their Helicopters’ Sing” and “Strung Like Lights at Thee Printemps Erable” feel like useful buffers. The seagull strings and eventual squall of “Mladic” remain titanic, while “We Drift Like Worried Fire” is the band using every tool at their disposal to record post-rock as epic and essential as it was in its millennial heyday. There are no cobwebs being dusted off for these recordings.

No, there are no new beginnings. Godspeed’s scorched earth is one composed entirely of negatives, an ongoing end of “no” after “no.” There are no political parties, only politics. There are no governments, just dysfunctional apparatchiks. Apocalyptically possessed mad preachers? Raving lunatics? Or just a bunch of musicians with an ax to grind and bills to pay?

The answer to all of these questions, funnily enough, is in the world they deny — that of the “yes.” And it’s that contradiction which still makes them compelling.