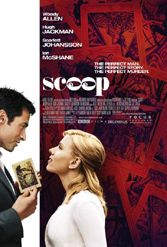 After “Match Point,” British nobility (Hugh Jackman as Peter Lyman) again furnishes the charming but bad guy as Woody Allen continues his pursuit of American tragedy, this time with a lighter touch.

Neurotic, fumbling Allen plays magician Sid Waterman, “The Great Splendini,” at work in London. Old Allen refreshingly is still funny with gags and ironic observations. Water plays a supporting role again as an ominous rather than life-giving force with a vague nod to Ingmar Bergman. On their journey with Death on the River Styx, a hardboiled but deceased reporter Joe Strombel (Ian McShane) gets a scoop from a fellow passenger about the identity of her killer — perhaps serial. Joe’s ghost “appears” in Allen’s magic act and selects journalism student Sondra Pransky (Scarlett Johansson in a ghastly wardrobe) to receive the scoop and fill his shoes before he returns to the dead souls.

A few nagging questions, though: Why would a woman have sex with a man she believes might just be a serial killer? Why does a young attractive reporter resort to seduction to obtain information? What happened to wit and guile? Are all Americans in London so dopey? See it for the cast, charm and laughs.