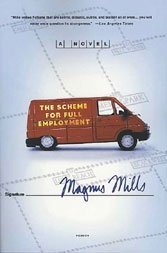 Mills is a fierce little mouse who persistently and subversively gnaws away central authority. His parody of conformity and central planning focuses on the drivers of look-alike UniVans that shuttle from one local depot to another mostly bearing replacement parts for the vans themselves. Fully employed but bored silly, the drivers concentrate on tea and card games, sneaking home early on the sly. “We merely had to drive a van between A, B and C,” writes the aloof narrator, “and our continued employment was guaranteed.”

The Scheme, “the great panacea,” is Orwellian slapstick with constant jabbing at socialism (“The idea of leaving the Scheme, with all its safeguards, and venturing into the world outside, was unthinkable to most employees.”) The limits of the parody are its obviousness. When the narrator’s UniVan sputters and stalls, he explains that he knew the tank was low but that it’s not his job to fuel up (“There’s a difference between full employment and being fully employed…”)

The dead-pan, pass-the-buck silliness goes wacky when the Scheme’s slackers, or “early swervers, are challenged by the “flat-dayers,” “extremists” who believe in a full eight-hour of “work.” Cometh a dumb-and-dumber war between by-the-book do-nothings and cake-sneaking loafers.