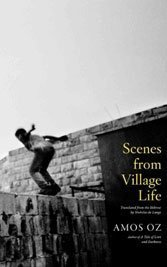 By Amos Os, translated from the Hebrew by Nicholas de Lange

What wonderful stories Amos Oz tells. Here, magic wand-style, he conjures up Tel Ilan, a sleepy, vaguely haunted Israeli hamlet, populating it with tender, often eccentric characters whose love-of-life wistfulness run through seven tales that make up a moving tableau, as if the town’s collective, and Israel itself, possessed a knowing soul, and a mysterious one at that. People entertain strangers, or hear voices, or vanish, or seek apparitions. No one discusses politics. Ghosts alight, or seem to.

Gili Steiner awaits her beloved nephew on the night bus, but he doesn’t arrive. Thinking him lost, she wanders village streets to find him. Ari Zelnik invites a stranger into his home and listens, dumbstruck, as this salesman, or relative, or both, bewitches him. Real estate agent Yossi, eager to get his hands on a property, woos the old owner, only to find himself tripped up and lulled to sleep forever by a pretty girl. Cranky ex-politician Pesach Kedem lives with his daughter Rachel and her an Arab student, who also tends to the house. Both old Jew and young Arab hear digging noises at night. Rachel finds them both silly, until she, too, is enchanted. Beni Anvi, the mayor, gets a cryptic note from his wife not to worry but she’s nowhere to be found.

These are in fact scenes from village life, both gossipy and fraught, but Oz brings an uneasy enchantment to each one. Characters recur in separate stories to help assemble the whole of the tapestry. Perhaps most affecting is “Strangers,” in which shy teenager Kobi Ezra passionately desires local librarian Ada Dvash, who is 15 years older. Both will win a little, and lose a lot, one shamed, another saddened, but Oz handles their fleeting encounter with the melancholy aplomb of a man who knows most few human stories give their passing residents the resolution they desire. “Everyone is a stranger to everyone else,” says old Pesach at one point. “Even the stars in the sky are alien to one another.” Oz’s stories are comets that pass close but know not to brighten too much.