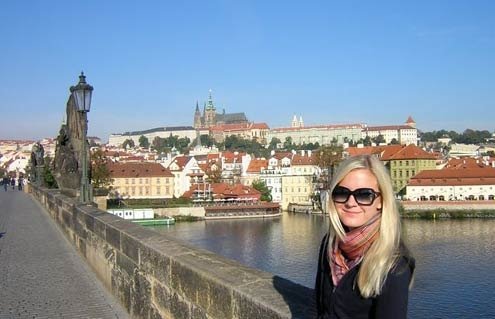 The author on Charles Bridge in Prague. City photos by Ingrid Williams.
I

realize that my complexion can be disturbing. Not quite translucent, my paleness lends itself to no more than a light toasting from the sun before breaking out in scorching, angry blisters. With blonde hair and Swedish genes, I will never have a deep Armani perma-tan. I’m okay with that.

My first Italian teacher, however, was not. Two years ago, during my first month of classes in Pisa, she was so unsettled by the daily sight of my pale skin that she began asking me when I planned to go on vacation. She didn’t understand that vacation had nothing to do with it. At the time, it was August and anyone in Italy who wasn’t on vacation couldn’t manage to forget that they should be. And having to look at my tan-free face for four hours every day was just one more reminder that instead of sitting in a humid classroom, we should all have been soaking up the sun on the beautiful beaches of Versilia.

One day, during a lesson on the conditional tense, the teacher asked where we wanted to go on vacation: to the beach or to the mountains. When my turn came, I should have made something up. Instead, I answered honestly and said, “Vorrei andare in città“.

My teacher frowned. “The city? Which city?” she asked. “Rome? Florence? Venice?”

She smiled gently at me. “You don’t like the beach?”

I like the beach, but the truth is I’m a city girl — a city girl who now lives in a tiny town in Liguria. I’m happy to spend an afternoon at the beach (with no less than 45 SPF, of course), but if I am taking a vacation, I am going to travel. This idea seemed to perplex my teacher. “Why would you leave Italy to go somewhere else when everything you could ever want is right here?” she asked.

I wondered if wanderlust was a foreign concept to Italians. I said I liked seeing new places, experiencing different cultures, trying new foods. The food was an issue.

“But Italian food is the best. Why would you leave to eat lesser food when you could travel within Italy and eat the best?” she demanded.

I demurred. Linguistically, I was in over my head. But her argument stuck with me.

A few days later, my neighbor echoed a similar sentiment. In passing, I mentioned that my husband and I would be spending a long weekend in Munich.

“But have you been to Montemarcello?” he asked. “It is only a short drive away.”

I admitted that we hadn’t.

“And Chiavari?” he continued.

Again, I confessed that we hadn’t yet been to Chiavari.

And with that, I realized the problem. There is no doubt that there are many different places in Italy that are beautiful. But so many of those places are beautiful in the same way.

Just in our area, we have the Cinque Terre, which are beautiful … just like Portovenere, Portofino, Lerici and, apparently, Chiavari and Montemarcello. Once while sailing along the Amalfi Coast, I remember swatting away the nagging thought that the breathtaking scene before me was just an expanded, luxury version of the Cinque Terre — with clogged roads where the charming, overgrown footpaths should have been.

But even though the sight of the wild waves crashing into the sheer cliffs in Portovenere always gives me the chills, I also got the chills the first time I saw the Eiffel Tower in Paris and La Sagrada Família in Barcelona.

My husband thinks that my somewhat blasé attitude about traveling in Italy stems from having already seen so much of it. Although we haven’t exhausted the list of places to see here, we have visited all the big cities, most of the major towns, and a generous handful of smaller villages over the years.

And now, after focusing our long-weekend jaunts around the rest of Europe for the past two years, I find my thoughts wandering to places even further afield. We dipped a big toe into Africa with a visit to Marrakech, and soon we will take our second taste of Asia with a two-week trip to Japan.

I suspect that after two weeks of sushi and rice for breakfast, lunch, and dinner, I will crave the same pizza and pasta that today feels humdrum. For me, spending time outside my comfort zone is the best way to remember why I made it my comfort zone in the first place. I love living in Italy. I just need to leave now and then to remind myself. So to that end: Sayonara Italia!