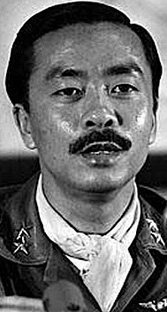 peak of Ahmad Chalabi and the names Diem, Ky, and Thieu also make the roll call.

Chalabi is the exiled Shiite that Washington once counted on to glue Humpty Dumpty Iraq back together again after American liberators purged it of resident evil. When policymakers soured on his wrinkled loyalty and its price-tag ($350,000 a month) troops sacked his Baghdad offices.

Sacked also is someone’s niftily impressionable vision of fast-talking outsiders returning home to run a post-Saddam Iraq, which looks every bit like the country the CIA evidently dubbed “The House of Broken Toys.”

John F. Kennedy and Lyndon Johnson, Democratic pillars of tough-love liberalism (followed later by Richard Nixon, a Republican), primped a succession of luridly bad South Vietnamese leaders in a self-important effort to win the “hearts and minds” of the South’s napalm-bleached population.

Diem’s own generals gunned him down, with considerable CIA help, in 1963.

President Nguyen Van Thieu, the most puppet-like of the lot, endured from 1967 through 1975, when his tenure, state, and capital were overrun by Northerners (he died in Boston in 2001).

Each man was an institutional Chalabi, subsidized to deliver the impossible: affection for military “guests” and the pacification of a pained and restless population. When the war crushed LBJ, Nixon demanded that Thieu embrace “Vietnamization,” in which South Vietnamese troops were ordered to adopt the fight as theirs. The project failed, since the armies of the South were often as curved as their leaders.

To hope history might inspire reflection among Messrs. Rumsfeld, Cheney, Powell and the American Joint Chiefs is apparently futile. They’re in too deep. The U.S.’s next move, whether in occurs this June or next, will approximate Vietnamization, with Iraqi military and political “forces” invited to begin crafting, and paying for, democracy – with a little help from their liberators.

The South Vietnamese debacle should have demonstrated that bribes, cash-aid infusions, 500,000 troops, and a plethora of weapons could not fix an earlier batch of broken toys, let alone sway hearts. And if Vietnamese hearts were lost a priori, minds followed when the conflict, among locals, pitted foreigners against nationals (a repetition of French hubris), with the foreigners camped out in the south. The installation of lackeys and the promotion of questionably free elections made the charade more palpable.

The U.S. proxy policy of the 1980s (supporting or eroding regimes while avoiding entanglements) responded in part to this reality. In a messy world you got further paying those who pretended they were on your side than entering someone else’s town bearing a bloodied flag. Expediency prevailed over confrontation and brawn, particularly with Moscow stirring.

While it’s fair to say the events of September 11 rewired the hot-box, swelling old muscles, it’s reckless to forget the consequences of what happens when you manipulate the destiny of others.

Shah Mohammed Reza Pahlavi of Iran, who systematically paid Shiite clerics to control Islamic militancy, closed the coffers; Washington thought this irrelevant. Within a year, the Shah was gone and Ayatollah Ruhollah Khomeini, the shrewdest of the modern primitives, was back from France and Islamic militancy was rekindled, molded and built for export.

Over 50 years, most of Cold War vintage, the United States has backed a fair share of losers and embittered a number of conquerors it once shored up.

Recently, it paid to “win” in Afghanistan, recruiting warlords and turncoats. It would do the same in Iraq, as it tried to abortively in South Vietnam, if only umbrage had a feasible fix-fee. It does not.

A capitalist state with moral pretenses and a currency that says it trusts in God can be forgiven messianic posturing. But posture is still posture. Realism, cynicism and history should teach other lessons:

That liberation is always occupation, and most occupations fail outright, particularly those fervently advertised as benevolent;

That leaders-for-hire are useless unless credible in their own country;

That egalitarianism is rarely much good when forced, and force can’t look democratic unless asked for.

Which is why the Chalabis and their ilk, earnest or crooked, are in no position to endure a homecoming without turning on their one-time masters, or pretending to. They must demonstrate they are untainted, therefore worthy of survival, and the need to do so reflects the reek of the brush – more bad news for the latest exporters of freedom.