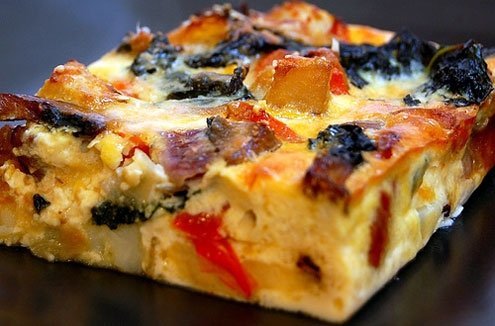 A frittata is perfect for a makeshift get-together.
A

fter the holidays, people often take stock of what they’ve spent. That’s particularly true among Italians, where having sit-down meals with family and friends is an essential Christmas rite. December leads all other months when it comes to food costs.

In fact, some families gear up months in advance. On Christmas Day I had lunch in Perugia where the hostess and three friends had prepared 7,400 hand-made Umbrian “Cappelletti” (a traditional Christmas dish). As she told me about all her hard work, her husband, a postal clerk, dutifully informed me he’d counted all the cappelletti and that they’d made 100 less than last year.

What fascinated me was their complete reliance on organic foods. The eggs for the pasta came from hens bred by the family, the meat in the tortellini was from local farms (with low CO2 impact when it comes to transport), and the capons for the broth were bred and castrated in-house. The husband told me his wife was so expert at castrating chickens that early in their marriage he thought twice about sleeping with her.

Looking at this grand but careful meal reminded me of the extent to which most Italian foodstuffs are still produced in villages scattered throughout country. Thanks to local culinary traditions, Italian food can be seen as having a low environmental impact.

That’s not the case in many Western nations, where affluent lifestyles can lead not only to overeating but pure waste. Kevin Hall, a member of the U.S. National Institute of Diabetes and Digestive and Kidney Diseases, calculated how much Americans could have eaten based on the average weight of Americans between 1974 and 2003. He then examined data sent by the U.S. government to the UN Food and Agricultural Organization in Rome over that same time period regarding the amount of food available for public consumption. He calculated “wasted food” based on the difference between available calories and calories consumed. For example, in 2003 Americans on average had a potential of 3,750 calories daily. Of that number, 2,300 were actually consumed, meaning 1,450 were lost — that’s 40 percent in the garbage.

Researchers blame consumers, who either buy too much and let it rot in the fridge or eat too much, too fast, with the leftovers going nowhere.

These lifestyle changes have a lot to do with income. After the war, most Italian families bought only what they knew they could eat. My grandmother still drains olive oil bottles to the last drop, a vestige of wartime days when oil was available only on the black market and cost a ton.

These days, many people shop just once a week, on their days off. That leads to massive fill-ups, some of it useless. I’m among the impulse-buying culprits. I fall for new products or “miraculous” three-for-two offers. It’s only when I get home that I have to ask myself why I bought something I really didn’t need.

According to Italy’s National Association of Dieticians (ANDID), Italy throws away six million tons of edible food annually, or 27 kilos a head. That’s annual waste worth €584 per person.

Having read about the lifestyle of

Colin Beavan, the so-called “No Impact Man,” I decided to put together a no-impact recipe, a frittata.

The classic frittata, a kind of half-breed omelet, usually involves choosing between appropriate leftovers and adding eggs at the end. It can qualify as a hot meal, an apperitivo or a snack, maybe with a good medium-bodied red wine such as a Sangiovese Romagna or a delicate white such as a Trebbiano.

You can create your own no-impact meal by asking friends to come over with leftovers. You can then combine and match the resulting frittata with a favorite wine.

Frittata no impact (Ingredients for 4-to-6 people)

Check your fridge for any leftover vegetables such as zucchini, asparagus, broccoli, potatoes, onions, spinach, endives, or any leafy vegetable that is not too bitter. Also be on the lookout for any ham, bacon or raw hamburger you might have bought (80/100 gms).

The next step is choosing among your ingredients. Let’s say you have zucchini and asparagus.

You can use one of these options or all of them together. Just remember the obvious: The more you’re putting in, the larger the pan you’ll need. After you have your ingredients set up: