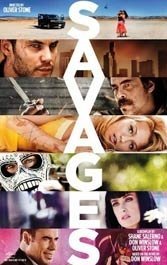 Revenge movies that rely on romantic glue for traction need a gimmick to make it through two hours. In this drug war ditty, that gimmick is a blonde who plays siren to two drug-dealing white boys, one of them an Afghan vet, who predictably get themselves — and said blonde — into big trouble with a Mexico cartel led by a brunette and her henchmen (Salma Hayek and Benicio Del Toro).

Stone’s pacing is fine, with flesh, gore and blow-ups as lubricant. Until, that is, both film and plot wear thin, which is about halfway in. After which Stone turns his attention to buddy-bonding (tough guy Chon and wannabe Ben) and improbable girl-ties (tormentor Elena vs. captive O). Grinning Lado reeks of Quentin Taratino caricature, something Del Toro makes no attempt to hide. Parody, read rigor, sets in. Genre-wise, call it a buddy-catfight-narco-spaghetti western. Maybe a first.

Hayek and Lively do their pretty parts, particularly the former; Del Toro is suitably villainous; and the north-of-the-border/south-of-the-border cultural divide gets its moments (with John Travolta thrown in as a two-timing DEA agent). Ultimately, though, Stone’s only dramatic weapon is his ménage à trios, which he uses to double up on male loyalty. He also throws in a ludicrous twin-edged ending, which only adds to runtime that might have been cut by a third.