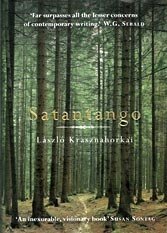 László Krasznahorkai’s acclaimed Communist-era novel is a dark pastoral about duped but stubborn country people going nowhere fast. So barren is their landscape — drink-fueled friendships and loose marital ties — that it’s rarely clear if we’re on known topography or in the hinterlands of some deadend afterlife in which “the lost melody of hope” is a pitiless as the bell tolling for thee and me.

Beginning to end, the focus is on the gossipy “collective farm” villagers who’ve worked to make ends meet, “stubborn survival” ahead of any possible satisfaction. Farm life has gone downhill since their most dynamic resident, Irimiás, left to vagabond elsewhere. But now he’s coming back, to save them they think, or at least re-confer their lives with meaning. Except that Irimiás is an opportunist and swindler, an informant and huckster. It’s pearls before swine.

Krasznahorkai’s vision of a devastated Hungary features two kinds of people, self-aggrandizing informants, Irimiás among them, and their willing victims, the “bumpkins.” Sandwiched in between are cripples and lunatics, vagrants and whores, those on the fringes closer to the transcendental than the ones who follow orders until life drains away. Irimiás and his doom-saying Sancho Panza mate Petrina are comic nuggets of fool’s gold in an absurd police state where even intelligence officers are bewildered. Resurrection, such as it is, comes only to the completely addled, in this case a crazed peasant girl who poisons a cat and then herself, sure angels will fetch her. They seem to, in fact, but if so they come for her alone, leaving everyone else to fend for themselves.

Krasznahorkai’s deep-water novels are a choral of densely interlocking monologues and dialogues chock with aspirations and disappointments, since one is joined to the other at the hip. Satan’s tango — the novel’s 12 chapters match the dance’s give-and-take steps — includes “demonic capering” among drunken villagers determined to believe Irimiás can wash away their woe. But the next morning resembles the one that preceded it, bleak. The devil by any name is as incompetent as any known God. Developed into a seven-hour film by Bela Tarr in 1994.