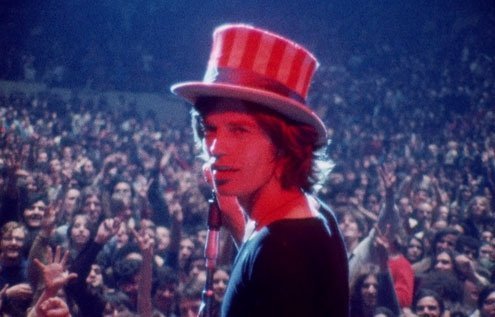 he 1960s saw the making of a number of seminal rock music documentaries, two of them by D.A. Pennebaker, “Don’t Look Back,” which covered wisecracking Bob Dylan’s 1964 tour of England, and “Monterey Pop,” a rousing tribute to the 1968 Southern California festival that witnessed the ebullient and playful Jimi Hendrix come into his own.

But the most influential and enduring of these films may be “Gimme Shelter,” a disturbing chronicle of the ill-fated Rolling Stones trans-American journey that culminated in the violence-marred December 1969 Altamont Free Concert.

What makes “Gimme Shelter” particularly compelling is how it catches lightening in a bottle. Documentary makers Albert and David Maysles intended only to make a movie about The Rolling Stones’ 1969 American tour, focusing on the band and its outsized leaders, Mick Jagger and Keith Richards, each vain in his own right. Most of the film predictably centers on studio footage and stretches of band’s Madison Square Garden performance in November.

But eager to lure Woodstock-sized crowds, The Stones added a Dec. 6, 1969 free concert at the Altamont, California speedway near San Francisco. The organization was slipshod at best, with local Hell’s Angels controversially anointed as the band’s security force.

The northern California mood was toxic from the start — The Jefferson Airplane’s Grace Slick would later call it “a hazy, abrasive and unsure day,” which the footage bears out. Police clashed with hippies (the crowd was estimated at 300,000). Jagger was punched as he left his helicopter. The Angels formed cordon to protect a speedway stage that was particularly low to the ground. When 18-year-old Meridith Hunter, who had already tussled with Angels, made a second lurch toward the stage, this time brandishing a gun, he was stabbed to death, a blurry scene cameraman Eric Saarinen caught on film. Later, Rolling Stone magazine would call later Altamont “rock and roll’s all-time worst day, December 6th, a day when everything went perfectly wrong.”

From the time of its release, “Gimme Shelter” was tipped as Woodstock’s inevitable comeuppance. No more summer of love. No more innocence. Though the film’s first half is essential viewing for Jagger’s self-satisfied Madison Square Garden preening and Keith Richards’ laconic disdain for it, it is the Altamont segment that transcends genre. The Jefferson Airplane performs before restive masses increasingly tired of waiting for The Stones. It is a crowd that already at war with itself.

When the Stones do arrive, the scene only decays further. It’s hard find better reality filmmaking than seeing a mob turned into the sum of its violent spasms as a cowed Jagger rushes through “Under My Thumb.” Rock’s reigning superstar repeatedly pleads for calm but gets nowhere. His celebrity is irrelevant. Meekly, the band plays on.

Footage of lawyer Melvin Belli making security arrangements before the concert acts as a kind of harbinger for what’s ahead interviews, with band members afterwards sounding like troubled little boys who don’t know what hit them. It’s rare to see a humbled Jagger, but it’s all here.

In 1970, Rolling Stone published an extensive and unsparing look at what went wrong at the concert. It ended damningly. “Altamont,” wrote the magazine, “was the product of diabolical egotism, hype, ineptitude, money manipulation, and, at base, a fundamental lack of concern for humanity.”

The genius of “Gimme Shelter,” and its editing, is in the way it sticks with the band as it drives headlong into the abyss. There is no voice-over or outside commentary. No effort is made to inject buffering context or perspective. The Maysles Brothers wanted it raw, and in that sense they presaged peer-to-peer video sharing.