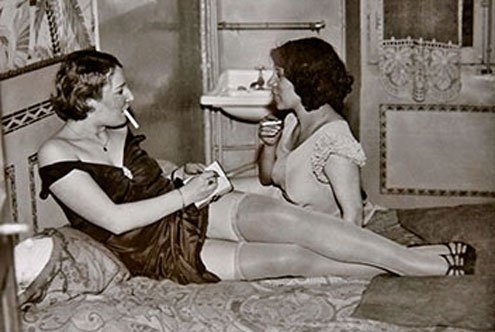 Bordellos — "case di tolleranza" — were legal in Italy until 1948, when the Christian Democratic Party had them outlawed.
T

he recession seems to have hit everyone in Rome. Well, almost everyone.

The street I live on happens to lead to St. Peter’s and plays host to a daily pilgrim-fest featuring Pope Francis’s fans. Many are school kids still in uniform. Entire parishes seem to spill out of tour buses. Most of the visitors usually fall into line behind a guide holding up some kind of identifying flag or marker. The problems start when different guides happen to decide on the same flag. There’s an urban legend about a group of Polish pilgrims disappearing into thin air. It turns out they never got further than Romania. Close, but no pope.

But something changed when Benedict became pope in 2006. Without the allure of Pope John Paul II, who attracted pilgrims even into old age and illness, some businesses lost steam and a few shut down. Between the Benedict-inspired downturn and the ongoing recession, locals seemed resigned to the worst.

None of them could have predicted Benedict’s retirement, much less the Pope Francis-effect. My neighborhood is thriving again. The biggest winners are bed and breakfast spots and short-term rental apartments. Bars and restaurants have dusted off tourist menus. Italian-style “All you can eat for €15” menus are back up (even my local cobbler, who’d actually abandoned ship, has reopened).

Pope Francis has had a direct influence on the mood, tone and pace of daily life. On Wednesday, the day of his general audience, I leave home a half-hour early to beat the flood of tour buses. Dally and you risk tour-bus gridlock.

Walking out the front door of my building complex is also a risky proposition. I need to dodge Vatican stragglers dashing for their bus. With an average of 50,000 to 60,000 people, most of them foreigners, trooping to St. Peter’s daily, I can sometimes feel like a stranger in my hometown (I occasionally check my passport to make sure I still live here).

The Vatican rush is the sacred part of my day. But there’s also the profane side.

Late one afternoon, I saw a well-dressed stranger talking on his mobile phone outside my building while scanning the names on the buzzers. I’m a good Samaritan (and curious), so I offered to help.

He said he was looking for a vacation rental unit that went by the name of Capri. It’s in our building, so I showed him the buzzer. Though something about him struck me as odd, the next few days were uneventful and the mystery man fell by the wayside.

But then my wife reported the same experience: a strange man out front looking for the Capri short-term rental units. The mystery deepened when we began hearing noises coming from the Capri units. Looking up at the Capri floor, I saw alternating lights, mostly red but then blue – and it’s not Christmas.

Suddenly, I put two and two together. We had a hooker in the building. Red meant “busy,” blue meant “available.” The light was mostly red. Prostitution, illegal in Italy since 1948, is recession-proof.

Basically, a unit in our building had become a smalltime bordello just a half-a-mile from St. Peter’s. I immediately got on the phone with the condo manager. Am I a moralist? No. But with two small children I didn’t want strangers in the building. The manager said he’d call the owner of the unit and clear things up.

Fair enough. For a while, everything seemed to return to normal, minus the lights. By now everyone in the building had heard the buzz. Our elderly neighbors were particularly mesmerized. On my way in and out I’d see them looking up at the Capri windows, laughing and gossiping.

One building resident told me he was frustrated that he hadn’t made the great discovery. He spent most days on his balcony where he tended his flowers and monitored ground floor comings and goings. He couldn’t believe he’d missed the obvious.

Then, after the fuss died down, the hookers got going again. Now there were two of them and they’d modified their routine. Clients no longer came to the buzzer, but waited in their cars until they were let into the garage. Coming home at night I’d see men sitting in their cars, smoking. Judging from the cigarette butts, Capri’s business was booming.

Obviously, going through the condo manager hadn’t worked. This time, a neighbor and I went to the police. Only then did the red and blue lights go out for good.

But there’s an expression in Rome about opportunism, quando il Diavolo ci mette la coda, which basically means “when the devil gets going.” One day I again heard suspicious sounds on the stairwell. Out loud, I basically said, “Who goes there?” Two girls scrambled down in a hurry and shot past me. Both were well dressed and heavily made up.

They made a dash for the door but so did I, with my phone in photo mode. I printed and posted the photo on the building bulletin board with a warning note. No, they weren’t hookers. One of the two was eventually identified as a well-known thief who worked Rome’s metro system. By then I’d become the building’s accidental FBI agent.

That night we had a barbecue dinner with friends and tried to laugh it all off. What better way to squash the devil, I thought, than to cook up pressed-chicken Pollo alla Diavola?

I should have invited everyone in the condo.

— Finely chop all the herbs. Wash and dry the chicken and slice it open along the sternum. Put the chicken on a cutting board with the open end down and flatten it with a rolling pin.

— Sprinkle the meat evenly with salt, pepper and abundant chopped herbs, and let it rest for 15 minutes.

— Grill the chicken, cooking each side for 15 minutes, basting it often with a mixture of olive oil and lemon juice.

— When the chicken is almost cooked, sprinkle it with the half-glass of white wine.

— In the meantime, place the bread slices and the bay leaves on the grill, which will flavor both the chicken and the bread.

— Chop the cherry tomatoes into small wedges and place them in a bowl with salt, pepper, and oregano.

— Rub the bread rub with a clove of garlic (press harder for a stronger garlic taste).

— Spread the finely-cut tomatoes on top of the bread and mix with the rest of the ingredients.

— Serve the chicken along with toasted bread.