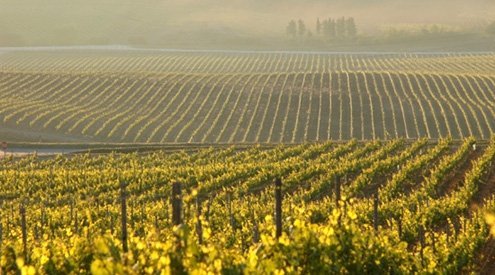 o much attention has been heaped upon the Sicilian wine renaissance in recent years, you might be tempted to brush it off as mere marketing fizz. The truth is that something very special is happening in island vineyards.

With an abundance of sunshine, ideal growing conditions, fertile land with gentle slopes and cooling breezes to keep grapes healthy, Sicily’s vintners have few excuses for making bad wine. Yet, decidedly unsophisticated plonk is precisely what Sicily offered, back when it paid to grow for quantity, not quality.

Today, thanks to a handful of dedicated producers driven by stiffer competition from abroad, many of the wines released are beautiful expressions of Sicily itself. They are spicy, sassy, savory, rich in color and often higher in alcohol content. They enjoy special cult status, and like the tasty geographic morsel they represent, they pack loads of sex appeal.

“Sicily is an enological Etna,” says Diego Cusumano who runs his boutique winery with his brother Alberto. “More than a wine renaissance, we are sitting on a volcano. Pressure has been building for a long time and it’s finally ready to explode.”

The Mediterranean island produces more wine than any other Italian region. With 400,000 acres planted to vine, Sicily’s grape-growing potential is bigger than all of Australia. But a growing number of producers have invested in modern equipment and high profile consultants to make fantastic wine available at reasonable prices.

Among Sicily’s most recognized producers are Rapitalà, Donnafugata, Regaleali, Planeta and Corvo. The latter is the poster child of Sicily’s enological revival. Corvo was owned by the regional government from 1961 to 2001 when it, Duca di Salaparuta and Florio were sold to Illva, producers of Amaretto di Saronno. The parent company invested heavily in new technology and made news in February when it purchased vineyards in three different locations. The storied winery had not owned land in almost a century, and the symbolic move severed it from the murky world of grape suppliers it once relied on, giving greater control over production.

Less stringent DOC regulations are another attraction. They afford more experimentation possibilities and blending combinations. Some of Sicily’s flagship wines are made of grapes indigenous to the island, like the robust Nero d’Avola, mixed with international grapes, like Cabernet Sauvignon.

Sicily is raising eyebrows in Italy’s traditional wine regions. Zonin, based in Veneto, owns the Principi di Butera estate on Sicily’s south coast. Another example is Andrea Franchetti, the man behind Tuscany’s Tenuta di Trinoro, who makes some of Italy’s most expensive and celebrated bottles.

Why would a man of Franchetti’s enological pedigree come to Sicily? “I guess you could say I like adventure and risk,” he says.

Adventure is what he got. Franchetti planted grapevines 1,010 meters up the flank of Europe’s most dangerous volcano, Mount Etna. Sixteen of his 40 hectares are blanketed by hardened lava trails and cannot be cultivated. The rest of his property is flanked by shrines and Madonna statues for safeguarding against future eruptions. They didn’t work back in 1947 when this very spot was engulfed in molten rock.

“Each year new eruptions add to the soil and fresh ash always falls. The land is so fertile, I see peach and apricot trees that are eight times bigger than in Tuscany,” says the owner of Passopisciaro, who makes a Nerello wine mixed with other odds and ends.

Count Gelasio Gaetani d’Aragona Lovatelli, a wine consultant and Brunello di Montalcino producer, is also under the spell of Sicily. He sits on the board of the International Wine Academy in Rome and hopes to open a similar institution in the Sicilian town of Noto. Wine course, lectures and food and wine pairing events would be staged at the new academy.

The count is also helping Emanuele Filiberto di Savoia, the formerly exiled royal heir, to select a site for a future vineyard investment. The count says Sicily is highest on his list.

— Nero d’Avola Fragrant and flavorful, this is Sicily’s most widely cultivated red grape. It yields beautiful results, especially in the areas of Ragusa and Syracuse.

— Nerello This is the vine most often associated with the black volcanic soils of Mount Etna. It’s a notoriously difficult grape to work and often ends up in blends.

— Carricante Another varietal found almost exclusively on Mount Etna — above 1,000 meters. It is the main component of Etna Bianco.

— Catarratto This is Sicily’s most common white grape and is used with Grillo and Inzolia to make the wines of Alcamo, the zone between Palermo and Trapani.

— Grecanico As its name implies, the grape probably originated in Greece. Today it is planted throughout Sicily.

— Grillo Another white varietal cultivated in the Alcamo area.

Inzolia Also known as Ansonica, this is a very popular grape and is the prime ingredient of Marsala.

— Malvasia Found throughout Italy, Malvasia thrives on the islands of Lipari and Salina where it is made into an aromatic sweet wine.

— Trebbiano One of the most widely cultivated white grapes in Sicily.

— Zibibbo Grown exclusively on the island of Pantelleria. The fruit is dried into raisins and pressed into Passito di Pantelleria.

A Look at the Food

Sicilian fare is generally spicier, tastier and sweeter — and considered among Italy’s best. The very word “gastronomy” is derived from one of the first treatises written about food. The epicurean Archestratus, a Greek poet born in Sicily in the 4th century BC, wrote “Gastronomia,” a cookbook in 330 verses describing “the best edibles and drinkables” of the ancient world.

He spoke of Sicily’s bounties: landscapes blanketed with grapevines, almond and olive groves, flanked by seas brimming with red tuna, swordfish, lobster and red mullet. Despite the generous yields of the land, the secret ingredient to Sicilian cuisine is foreign.

This triangle of enchantment and contrasts sits on the crossroads of Europe and Africa. History has seen Sicily stomped through by foreign invaders including the Greeks, Arabs, Swabians and Bourbons, all of whom left their mark on local cuisine. The most significant culinary contributions came during the Arab occupation that started in the late 8th century and last ed 300 years. Arabs introduced exotic citrus trees, and most importantly, sugarcane to feed Sicily’s insatiable sweet tooth. Eastern preferences leaned towards eggplant, mint, olives, pine nuts, capers and anchovies — building blocks of today’s cucina siciliana.

Arab chefs left behind semolina grain called cùscusu still served in Trapani and founded a pasta industry near Palermo using existing durum wheat plantations. They are also credited with inventing the one dish that most represents the island: pasta con le sarde. According to legend, a chef charged with feeding the conquering army found himself desperately shy of raw material. He sent troops to forage for food in the surrounding countryside. They returned with a random collection of edibles: sardines, wild fennel, olive oil, dried currants, pine nuts and saffron. The chef threw them together and a Sicilian classic was born.

Other dishes were born from a poor person’s tradition and were invented to trick hungry people into believing they were eating more calories. Falsomagro, translated as “fake thin,” is a large roll stuffed with hard-boiled eggs, meat, breadcrumbs, spinach and other leftovers. Involtini, or veal “napkins,” are rolled around bread, ham and caciocavallo cheese.

“Ask what an 80 or 90-year-old ate when they were young and they will tell you ‘bread, water, what we found in our gardens and what our neighbors gave us’,” says Anna Tasca Lanza, a chef and cookbook author who runs a cooking school on her family’s Regaleali wine estate. “Something as simple as fresh oregano becomes an explosion of joy.”

An epicurean’s tour of Sicily must end on a sweet note. No other Italian region can outshine the desserts of Sicily. Cassata is made with sweetened ricotta, almond paste, sponge cake and candied fruit. The island’s trademark treat is cannoli, or pastry tubes filled with ricotta cheese, chocolate bits, and candied fruit. According to legend, the city of Caltanissetta, known in Arab as Kalat an-nisa or “ladies’ castle,” was where Sultans kept their clusters of harems. A collective of bored wives apparently decided to turn their energies to making cannoli to pass the time spent waiting for a late night knock at the door.

Last but not least, cannoli

Some of the biggest and best cannoli are had in the town of Piana degli Albanesi, an Albanian enclave that still speaks an archaic language called Arbëreshe and celebrates the Orthodox rite, located 30 minutes outside Palermo. Locals warn against eating cannoli in the summer when pastures are dry and goats no longer produce the milk for quality ricotta cheese. Another point of Sicilian pride is gelato — but don’t even think of calling it “ice cream” since there’s no cream in it.

Pastry-shop windows throughout the island are decorated with miniature oranges, bananas, figs, cactus pears, and even sunny-side-up eggs known as frutta di Martorana that are carefully shaped from colored almond paste. First invented by La Martorana nuns in Palermo, these carefully-crafted works of art were, legend says, once hung from trees to fool a visiting archbishop into believing fruit grew in winter in Sicily.