Sardinia without a map 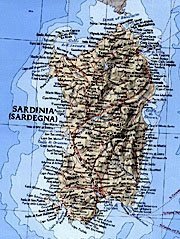 Sardinia’s flag is misleading at first glance. Four black guys posing in profile against a white background doesn’t seem to capture the essence of life on this island. Its origins have baffled me since October when my mother tongue led me from Washington, D.C. to Cagliari to teach English. Guidebooks say the flag represents the Moors’ stint as invaders, but details from Sardinians themselves are hard to come by. One of my students, Giovanni, a part-time coal miner, part-time class clown, provided his brand of clarity. “If there were four white people on the flag,” he said, “you wouldn’t be able to see them.”

One would think that an island with such a tangled history of invaders would be accustomed to diversity. The Byzantines disembarked, so did the Arabs, the Spanish and a variety of other cultures. Sardinia was once practically a Mediterranean hostel. But today, only 1.3 percent of its residents are foreign — making it easily the most homogeneous Italian region. As my blue eyes and pallid, Anglo complexion is met with curious stares from behind dark, furrowed brows and olive skin when I walk to work, it’s evident that foreigners in Sardinia stick out like… black on white.

Lying 200 kilometers from any mainland, Sardinia is among the most isolated islands in the Mediterranean — a fact that has contributed to its peculiar development. With a native language, Sardo, that predates all other Romance languages and a population recognized by the Italian government as a distinct ethnic group, Sardinia exists as a sort of Italian Hawaii.

Sprawling mountain ranges and poor infrastructure have hindered outside contact in many areas and contributed to a culture gripped in introspection. Though the European elite floods its pristine shoreline in summer — the fashionable Costa Smeralda has a regular patron Silvio Berlusconi — the island is largely left to its own, secluded devices (three sheep for every person) during the remaining months.

Like its more famous water-bound counterpart, Sicily, Sardinia has a history rooted in colonial oppression. Though Rome granted Sardinia a measure of political autonomy in 1948, allowing the island to have its own regional president, it suffered through foreign rule since the sevent century B.C. Just as Sicilians weary of foreign subjugation formed La Cosa Nostra as a way to police their own affairs, Sardinians have developed a self-conscious pride that, at times, manifests itself as a rejection of outsiders. While Sicilians are stereotyped within Italy as mafiosi, Sardinians, who still refer to the mainland as il continente, are embodied more lightly. In the dubbed Italian version of “The Simpsons,” Groundskeeper Willy, the fiercely independent Scottish janitor, gets a Sardinian accent.

Sardinia’s inward-looking mentality springs from its center a patchwork of impenetrable mountainous terrain known as La Barbagia. Having never been conquered by outside forces, the region has only been invaded in name. The Romans nicknamed the region because of the “barbarian-like courage” of its inhabitants whose insurgences not only repelled foreign forces, but also Christianity, as they continued to worship wood and stone until the seventh century. A driver traveling through present day Barbagia is welcomed to each town with a stark warning. A street sign greeting locals is written in Sardo, followed by one for outsiders in standard Italian. Nearly every sign in Italian is illegible because it is ripped through by bullet holes.

Granted, the Barbagia is a case study in insularity, but its defiant spirit echoes across the rest of the island. Even in Cagliari, the island’s bustling capitol facing North Africa, there exists a lingering suspicion of foreign influence. I live in an apartment tucked snugly between the graffiti tags No Global, and Stop Immigrazione! My two roommates, both university students, have never left the island. Like 80 percent of Sardinians, Daniele only speaks Sardo with his family and is the first to admit his Italian is poor. Simone has never eaten Chinese food.

Then there’s Giovanni, my coal miner student, who one day took me hiking near his family’s village in the Barbagia. With his job at the mine in jeopardy, he doubted he could continue to afford English lessons. I suggested he spend a year in America teaching Italian. “I’m not American,” he said. “I can’t just leave terra mia. I don’t expect you to understand.”