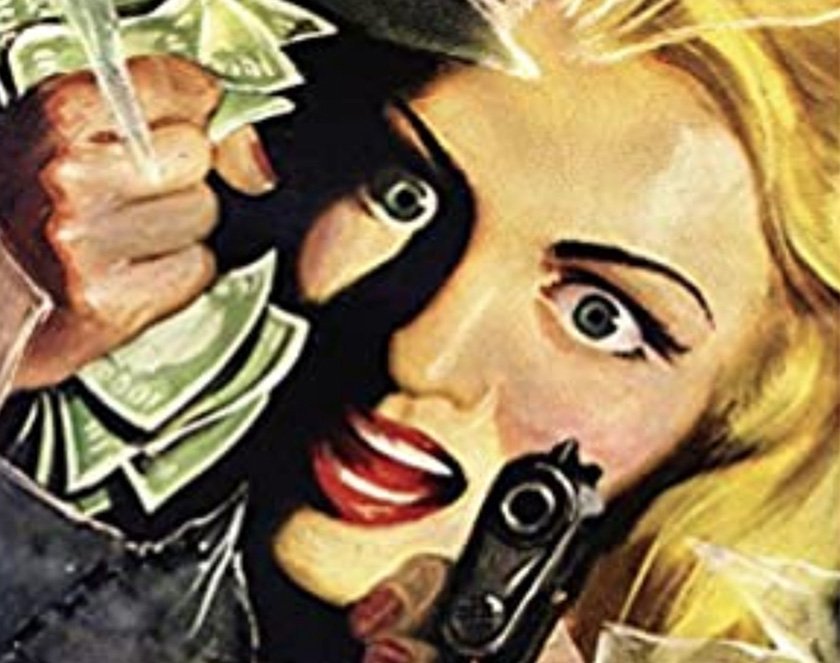 Crime fiction undone as the world undoes itself?
I

t’s a bad time for Sarasota Spring. She’s the 36-year-old private investigator featured in the novel I’ve been working on for seven years.

It took a long time to “find” Sarasota, who goes by Sara, since conventional wisdom doesn’t take to female PI’s and she’s an odd bird, too tall, a supermodel scarecrow at 5-foot-11, a redhead, from Lansing, Michigan with two years spent in Tulsa under circumstances she won’t fully reveal. She has a congenitally deformed right foot arch that doesn’t let her wear stylish spikes, something she likes doing to cow men into thinking they’re up against a weird model or a broken alien. Her father taught history at Ohio State but died suddenly at 54, heart attack. Estranged from her mother since childhood, she was brought up by her father’s uncle and aunt, a time she remembers only through ice cream flavor snippets. She weaned herself on Hammett and Chandler because Uncle Morris had vintage hardbounds and some withered paperbacks piled up in a corner of a shelf, which he called “the black hole.”

Sara’s been doing PI work for a decade, after deciding enough was enough in trying to get married and raise a family while working part-time at a software-writing outfit in Chicago, a lifestyle she felt someone had taught her without asking her first. Men were no problem. She checked out some and slept with others. Depression was tougher to beat, so were dreams of windows coming down on her like an anvil on a chopping block.

No social media for Sara, not since she got into PI work. Too many people looking you up does you no earthly good (her site is simple: all text), so anyone determined to find her usually comes up empty-handed or maybe with a photo of her beside her father published in the obit when she was 12. And with a name like Sarasota, Google can’t get enough of Florida.

Sara had a hunch Jane was her alter ego, a dark side PI.

Last I checked with her she was sleuthing around New Hampshire, sleeping in motels while trying to track down the mistress of a 60-year-old tech baron, who’d fallen for a girl named Jane who billed herself as a new age courtesan and worked in real estate on the side. He’d invited Jane to his island home off the South Carolina coast and she’d left having cracked a safe she couldn’t possibly have known about. Waltzing out with compromising documents regarding a Wall Street deal (legit, or so said Cranow) involving several politicians and the female owner of the largest tech firm in the country. So who exactly was “courtesan” Jane?

Sara had a hunch Jane was her alter ego, a dark side PI working to out men who needed outing while staying at arms length from an abusive past that included a spell spent in Tulsa about the same time Sarasota was there. And Jane’s tall, and she’s a redhead. She’s drop-dead gorgeous but her businessman-and-fiverr client Jake Cranow said she had the strange habit of walking with a slight limp. What else did Cranow know about Jane? Just that her father had died young and she liked pleasing men in exchange for favors — or not (depending on how she felt on any given day). Jane’s age? Probably early 30s, Cranow said in the call he’d made to Sarasota through his assistant, when he hired her.

I spend a lot of time checking in with Sara these days, seeing what, if anything’s, happening in the motel, just outside a town called Peterborough.

But Sara doesn’t move. She’s slipped into melancholy and the world around her has gone into virus mode and made everything she does, even having breakfast alone, seem surreal. She got an email from ex-lover Dave Trummer asking for her whereabouts, an update, was she safe? She let it sit there for a long while before replying “David who?” and blocking him.

She wants to arrange a casual face-to-face with Jane but can’t, not now, there’s too much lockdown interference, and how to track her in a mask? Assuming she hasn’t bolted, which no one can say one way or another because people in general seem estranged from each other outside their community bubbles.

She thinks aloud that the world has become literally the sum total of its atomic particles, all present and accounted for but never touching, scattered instead, working away from, not toward, interaction.

She has a theory that Jane, whoever she is, represents some sort of cosmic or existential setup, a way to meet an offshoot of who she might be, or might have been.

Sara’s slipped into melancholy and the world around her has gone into virus mode, making everything seem surreal.

But it’s been a year now that I’ve been waiting, then waiting some more, thinking external events would jump-start Sarasota’s story and bring her back to life, freed from motel life and back on the road in search of Jane, or down to Charleston, where she’s discovered Jane’s uncle (or someone who might be her uncle) lives in retirement, assuming he hasn’t contracted the virus and died.

Sara feels imprisoned by the circumstances around her, deflated and demoralized, and it’s not depression but some kind of world-sickness that’s stopped her dead in her tracks.

All around her feels surreal. One day she was asked to step outside so a team could disinfect her room. They did this weekly, management explained.

But finally, just the other day, a small breakthrough: Cranow texted her a number, and a woman replied, a woman who sounded too much like her, way too much like her, and that woman hung up in a second. Next time she called the number was unavailable, same thing an hour later.

Now she’s standing on a small-town street on a Sunday with no one around except a masked old lady with a cane. What next? she wonders.

What next? I wonder.

What to do with Sarasota Spring? What to do with her life and times, and who exactly is Jane, who Cranow won’t talk about much except to say she was a total charmer, “the kind I don’t usually fall for, I know my way around the block.”

But does the block he means, that fiction took for granted for a century, still exist, and with the predicates? That last part worries me a lot.

If the story has to be virally adjusted (and agents and editors are beginning to make that request), Sarasota Spring will stay stillborn, Jane just out of reach, Jake Cranow quarantined on his island, with me writing short stories about the life and times of camouflaged characters living out their mysteries at arm’s length.